Check out all the activities in Buenos Aires

Explore two of the oldest, most traditional neighbourhoods in Buenos Aires - San Telmo and Montserrat. Beautiful churches, pretty squares, and the tradition of tango will be waiting for you. 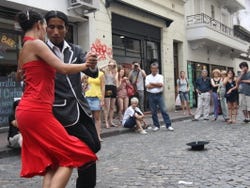 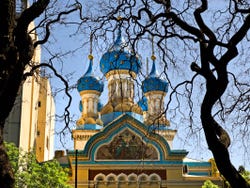 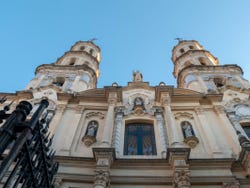 Our free tour starts in Lezama Park, traditionally an area where the inhabitants of Buenos Aires come at the weekend to take a stroll with their families and friends. Located in the heart of the neighbourhood of San Telmo, this is the perfect place to investigate the history of the neighbourhood. In the surroundings of the Cathedral of the Most Holy Trinity and National Historical Museum.

We will continue walking along the calle Defensa street until reaching the Pasaje Defensa, an ancient bourgeois residence which has been restored. Here, you will be transported back to the grand heydey of the San Telmo neighbourhood before yellow fever devastated it.

We will visit the San Pedro Telmo Church and later Plaza Dorrego square, where each Sunday a craft fair is organized that sells its original products to the visitors. We will also find a large number of couples performing the most traditional dance of Buenos Aires, the tango.

Our next stop is the 'Casa Minima', the smallest house in all of Buenos Aires. We will also encounter Santo Domingo Church and the Illuminated Block, in the heart of the Montserrat neighbourhood. This landmark is considered the intellectual cradle of the city. We head into the block to discover the Office of the Advocate General of the Missions and the colonial tunnels constructed under the ground.

After a guided tour of two hours and a half, we will end our tour.

Check out all the activities in Buenos Aires

The guide didn’t wait for us and begun the trip before the time. We arrived 09:50 while the tour was scheduled to 10:00 and she wasn’t there. After we managed to locate her she said that she didn’t know that there is another group and that she wasn’t prepared for an English tour. We joined a Spanish tour and she shared the time between Spanish and English so we had a lot of waste time.

8.7 / 10 9 reviews
If you find yourself in the wonderful city of Buenos Aires then a boat trip along the River Plate is simply an unmissable experience.
US$ 25
Book

9 / 10 6 reviews
Do you want to enjoy an authentic Fiesta Guacha? Come with us to the Don Silvano ranch and see the cowboy-style festivities in the Argentinian countryside.
US$ 78.66
Book

Explore the beautiful streets of Buenos Aires, and discover all the city's landmarks and monuments from the comfort of an enjoyable bus tour.