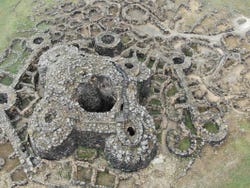 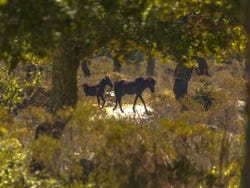 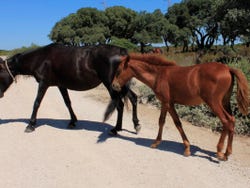 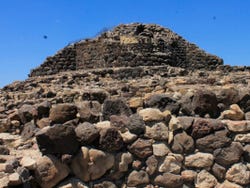 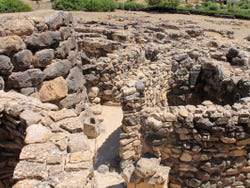 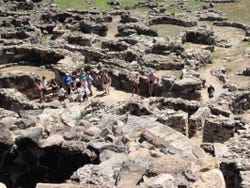 At the chosen time, we'll meet in the port of Cagliari, to head to the nuraghi of Barumini. Are you ready to discover all the secrets of these ancient stone constructions of Sardinia? Then let's go!

Our first stop will be the Casa Zapata Museum, a late 16th century building built on the ruins of a nuraghe in the 16th century BC. We'll visit the archaeological section of Casa Zapata, to see the pieces of an impressive collection of more than 180 finds. We'll also see numerous historical documents belonging to the Zapata family and, in the ethnographic section, some of the most common objects used by the inhabitants of the ancient village.

We'll spend 2 hours exploring Su Nuraxi, the most important archaeological site in Sardinia, declared a UNESCO World Heritage Site in 1997. The ancient village emerged during the 1950s, during excavations conducted by the great archaeologist Giovanni Lilliu, who brought to light an imposing nuraghe built in different phases, starting in the 15th century BC, together with a residential complex made up of huts. Amazing!

After five hours of discovering the Sardinian hinterland and its history, we'll return to the port of Cagliari.

Return transport to the port.

US$ 71.30
Free cancellation up to 48 hours before the service starts
Book

10 / 10 3 reviews
Discover the Phoenician and Roman legacy of Sardinia when you take this trip to the fascinating archeological site of Nora.
US$ 84.70
Book
like

10 / 10 1 review
Enjoy the best views of Cagliari with this hike on the Sella del Diavolo where you'll discover the natural beauty of this spectacular Sardinian landscape!
US$ 42.30
Book
like New

New
Discover a true natural wonder that dates back more than 2 million years on this incredible excursion to Neptune's Grotto. An unforgettable experience!
US$ 168.10
Book