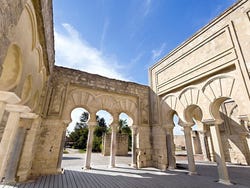 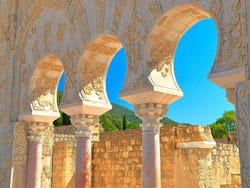 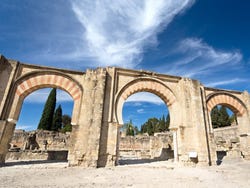 Begin your tour of the Medina Azahara meeting in the centre of Cordoba for your short bus journey up to the remains of the fortress, located just 5 miles (8 km) from the city. Abandoned and looted just 80 years after construction, and buried over time, the former capital of al-Andalus was discovered at the end of the 19th century. Spreading across 276 acres (112 hectares), it is one of the largest archaeological sites in Spain.

On arrival at the ruined palace-city, you'll enjoy a guided tour of the Medina Azahara, exploring the ten per cent of the site that has been uncovered while your guide reveals the secrets hidden in the fortress. Limestone walls with intricate arabesque carvings, golden ceilings and pools of mercury made the Medina Azahara a magnificent palace complex that was as popular with the princes, artists and philosophers of the time as it was important politically.

Travel back in time to the 10th century and see how the Caliph of Cordoba lived as you wander through the different parts of the ancient fortified city, admiring the splendour of its mosques, towers, servants' quarters, bath complexes and aristocratic residences.

After exploring the archaeological site, you'll have the opportunity for a brief rest before you visit the Medina Azahara Museum to discover the remains of the palace-city up close and learn more about the fascinating site. At the end of your visit, you'll return to Cordoba by bus.

In the case that the Medina Azahara Museum is closed, you'll watch a short film about the archaeological site instead of visiting the museum.

Entrance to the Medina Azahara.

Transport from Cordoba by bus (optional).

Shuttle bus service from the Reception Centre to the archaeological site.

You can book up until the previous day (6:00 PM local time) if there are still places available.

from
US$ 18.70
No hidden fees or surcharges
Free cancellation up to 48 hours before the service starts
Book

Susanna is the best guide we have had in Spain. Very understandable and knowledgeable.

Guide was knowledgeable and personal

Our guide ms susana was excellent and very knowledgeable. We really liked her and enjoyed our tour.

was able to get the tickets to Medina Azahara. Everything was like clockwork, I was at the bus stop at the appointed time, someone met me there with my ticket and off I went. Our tour guide was waiting for us at the museum when we arrived and took us to the archeological site, she was awesome. She knew the nuances and was interesting. Stayed with us until we got back on the bus. I chose the tour in Spanish language.

9.6 / 10 2,603 reviews
See the famous Mosque Cathedral of Cordoba and discover the largest Western Islamic mosque, converted into a Christian church in the 13th century.
US$ 25.30
Book
Free

9.6 / 10 5,891 reviews
Feel the transcendent culture of Cordoba on this guided tour of the most representative places in the Caliphate City.
Free!
Book