Discover the splendour of Cordoba at nightfall: delve into the mystery of the legends that surround this beautiful city, as you admire the sunset illuminations of its incredible monuments on this guided walking tour. 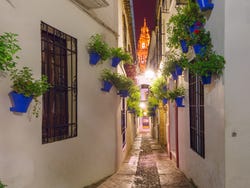 The tour leaves from Calle Ángel de Saavedra, in the heart of Cordoba's historic centre, just around the corner from the magnificent Grand Mosque, one of the most important achievements in Moorish architecture.

During the guided walking tour we'll wander through the most important streets in the city, which was the capital of Muslim Spain for 300 years. You'll see Cordoba's most iconic places of interest, which represent the legendary history found around every corner of the Andalusian city.

Admire the Roman Bridge, which has spanned the Guadalquivir River since its construction at the beginning of the 1st century), and stroll through the Judería, or Jewish Quarter, where the Jewish people of Cordoba lived for five centuries. You'll be captivated by the Mosque-Cathedral, considered to be one of the most important and impressive sights in all of Spain, and the 14th century Alcazar de los Reyes Cristianos, the palace-fortress that served as the main residence of the Spain's "Catholic Monarchs", as Isabella I of Castile and Ferdinand II of Aragon were known.

Having finished the tour, we'll invite you to join us in a glass of wine, so we can toast to a wonderful evening exploring Cordoba.

Glass of wine to finish the tour.

You can book up until the same day (5:00 PM local time) if there are still places available.

US$ 19.80
No hidden fees or surcharges
Free cancellation up to 48 hours before the service starts
Book

The guide Yazmine was very good

The tour itself was excellent, but the tickets you sent us had the wrong time on them! We showed up 2 hours early. Whoops.

9.6 / 10 2,603 reviews
See the famous Mosque Cathedral of Cordoba and discover the largest Western Islamic mosque, converted into a Christian church in the 13th century.
US$ 25.30
Book
Free

9.6 / 10 5,891 reviews
Feel the transcendent culture of Cordoba on this guided tour of the most representative places in the Caliphate City.
Free!
Book