Experience this unique two-day tour of Chernobyl and Pripyat. You'll explore the places destroyed by the most important environmental disaster of the 20th Century. 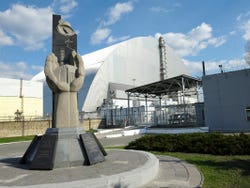 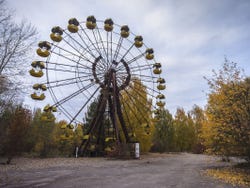 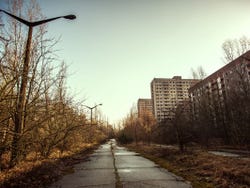 2 Day Trip to Chernobyl and Pripyat

On the first day, the tour leaves Kiev at 8am and heads to Chernobyl. After a two-hour bus journey, you'll arrive in the city that has been burnt in everyone's memories since the 1986 nuclear disaster which ruined the lives of so many families.

On arrival, you'll stop for a light breakfast to build up energy for the visit. You'll arrive at the first checkpoint, where you'll pass into the 30km Exclusion Zone.

Wandering through the city streets of Chernobyl, you'll see the museum, Saint Elijah Church, the Monument to the Chernobyl Liquidators and the park dedicated to the settlements that disappeared after the nuclear disaster.

On the first day, you'll cross into the 10km Exclusion Zone, entering the town of Kopachi just 4km from the Chernobyl Power Plant. The town was completely contaminated and had to be evacuated. Since then, there have been no signs of life...

You'll visit the Nuclear Power Plant zone, where you'll see the shelter constructed to confine both the exterior and interior of reactor 4, the reactor which produced the nuclear explosion. The sight will chill you to your bones.

Before the end of the day, you'll visit Pripyat, a town left completely empty after the accident. Here is where you truly see the destruction caused. Houses, hotels, schools and even a theme park - all abandoned.

After visiting the ghost town, you'll return to Chernobyl where you'll spend the night, gathering energy for a new day of exploring.

After enjoying a hearty breakfast, you'll head back to Pripyat. Here you'll see a different part of the Nuclear Power Plant: reactors 5 and 6. You'll also be able to get close to the plant's cooling towers, which remain unfinished, and you'll visit an abandoned Experimental Radiological Laboratory.

Today you'll have the opportunity to talk with people who stayed living in the area, as well as with members of the Institute of Nuclear Safety of the National Academy of Sciences of Ukraine in Chernobyl. You'll learn about the current state of the reactors, as well as the answers to all the questions you may have surrounding the 1986 disaster and its consequences.

Passing back through the radiation checkpoint will finish off the tour, and you'll head back on your way to Kiev.

The route is designed in accordance with the necessary security standards, reducing to a minimum the effects of radiation on the human body. The radiation received on the trip is equivalent to that of a two-hour plane journey.

The minimum age to take part in this activity is 18 years old.

Visit to the Chernobyl Exclusion Zone.

One night hotel stay in Chernobyl.

Permits to visit the sites on the tour.

Permits to take photos and videos.

You can book up to 4 days before (Kiev local time) if there are still places available.

US$ 238.50
No hidden fees or surcharges
Free cancellation up to 3 days before
Book

Free! Free cancellation up to 3 days before the day of the activity. If you cancel under this time or do not show up, you will not be refunded.
When the minimum number of participants (8) is not reached, we will contact you to offer you other alternatives.

good and well organized tour. You see a lot in a short time. Recommend avoiding weekends if possible as it is very busy. Smaller groups means you get to explore more insides of buildings. Also bring food with you as limited options once inside the exclusion zone and meals provides are rather small. Good, sturdy, shoes are important as lots of walking through glass and wet, over grown forest areas

9.30 / 10 27 reviews
Chernobyl and Pripyat are sadly infamous due to the 1986 nuclear disaster. Experience the ghost town and see the destruction caused.
US$ 93.90
Book
like Free

10 / 10 2 reviews
Explore the Ukranian capital city of Kiev on this walking tour and discover its most iconic monuments. And the best part? It's free!
Free!
Book
like

9.50 / 10 12 reviews
Discover Kiev's secrets on this English language walking tour. You'll explore the Ukrainian capital's key monuments and get to know its history and culture.
US$ 28
Book