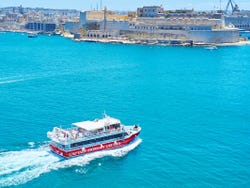 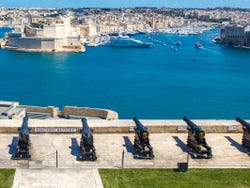 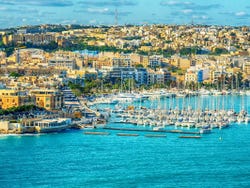 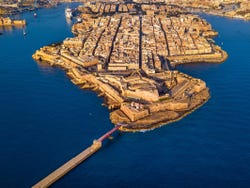 At the scheduled time, we'll either meet at Marsamxett Port or pick you up from your hotel in Sliema - it's up to you! We'll then head to the boat to start our unforgettable cruise around the ports of Valletta.

Over the first leg of the cruise, we'll sail alongside the Grand Harbour, a marina which ever since the time of the Roman Empire, has borne witness to the attacks such as the Great Siege of Malta, a battle which forever marked the history of Europe.

From your boat, you'll also be able to see the three historic cities to the East of the Grand Harbour, Cospicua, Vittoriosa and Senglea. The cruise then continues alongside Marsamxett, the most famous natural port in the Maltese capital. Here we'll be able to perceive the contours of Manoel island, whose hospital received the sick passengers from the boats which came to Malta in order to avoid passing their illness to the rest of the population.

Finally, we'll drop anchor on the banks of the picturesque town of Sliema, where you'll have free time to eat in one of its many bars and restaurants with delightful coastal views, or go shopping in its commercial centre.

We'll then return to the starting point and say our goodbyes.

When making your booking, you'll be able to choose from the following two options:

Tour without pick up

Tour with pick up

Hotel pick up and drop off (optional).

Cruise around the Valletta ports.

From
US$ 11.30
Free cancellation up to 24 hours before the service starts
Book

A very good option to get to know the city from the sea, see it from another perspective and continue to know it, although the sound and the explanations were not heard since they were made by loudspeaker, you do not find out much about the history but visually it is worth it. Opinion translated. Show original.

I had imagined other styles of excursion, the cruise was a boat that anyone could board and not only exclusive to the excursion. The guide spoke through a speaker in both English and Spanish but the audio going out to sea was not heard very well. It is worth noting that it is not the fault of the guide was always friendly and very well predisposed. Opinion translated. Show original.

8.20 / 10 87 reviews
Discover the history of the Megalithic temples of Hagar Qim and be enchanted by the beautiful landscapes of the famous Blue Grotto on this unmissable tour.
US$ 32.80
Book
like

8.70 / 10 297 reviews
As well as the beauty of its nature, the island of Gozo is known for its monuments and cultural heritage. Be seduced by its exotic landscapes on this excursion.
US$ 72.40
Book
like