Discover the best this charming Mediterranean country has to offer on this Italy Tour Package lasting 4 days. Enjoy the beautiful cities of Florence, Siena, Bologna and more. 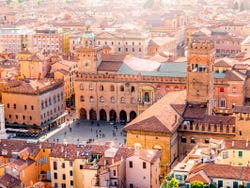 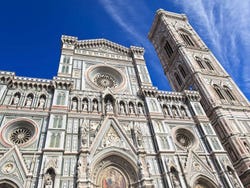 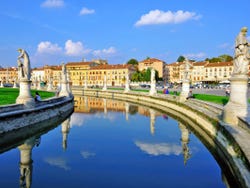 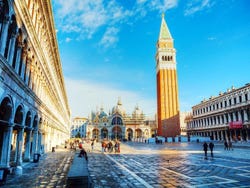 The tour around some of Italy's most exquisite cities will start departing from Rome early in the morning and heading to Assisi. On arrival, you'll have free time to wander around the historic centre and its symbolic landmark the St. Francis Basilica, one of Italy's greatest patron saints. You'll also see the remarkable frescos by Giotto and Cimabue.

Later, we'll make our way to the famous Italian region of Tuscany to visit the city of Siena. Here, you'll have the opportunity to walk around the Piazza del Campo, which has been repeatedly named as one of the most beautiful squares in the world.

In the evening, we'll go to Florence and settle into the hotel before having a delicious dinner.

After having breakfast we'll go to the centre of the city to start our tour around the home of the Renaissance. You'll be impressed by the city's three main buildings, the cathedral, the baptistery and the bell tower. Together they form an architectural complex of white and pink marbles in which you can appreciate the transition from medieval Florentine art to the Renaissance style.

Following on, we'll visit the Piazza della Sgnoria and the characteristic Palacio Vecchio. We'll also stop at the Santa Croce church, which hosts the remains of famous historical figures such as Michelangelo and  Galileo Galilei. Then, we'll enjoy a delicious lunch in a traditional Tuscan restaurant. In the afternoon, there is an optional tour to Pisa or you can continue exploring Florence.

Early in the morning, we'll make our way to the unique city of Bologna, named a UNESCO World Heritage site, which is characterised by its 40 kilometres (25 miles) of porticoes and arches. Here we'll admire the medieval architecture as we visit the Piazza Malpighi, Piazza Nettuno and Piazza Maggiore. Did you know that the San Petronio Basilica in Bologna was originally going to be bigger than St. Peter's Basilica in the Vatican?

In the afternoon we'll stop in Padua, another unmissable jewel in Italy. Then the tour will head to Venice, where we'll get settled into our hotel.

After having breakfast in our hotel in Venice, the tour will end.

On this 4 Day Italy Tour Package, you'll be staying in the following 4 star hotels:

The price indicated is per person staying in a double or triple room. If you're travelling by yourself there is an additional supplement to pay.

The accommodation for children under 6 years old is free if they are sharing with two adults. In this case please contact us when booking.

At the time of booking this tour, you can choose between two options (standard or superior accommodation). In Venice, the hotel will differ depending on your selection. The Hotel Delfino in Mestre corresponds to the superior option and the Carlton Gran Canal on the island of Venice corresponds to the standard category.

You can book up to 7 days before (Rome local time) if there are still places available.

from
US$ 720.30
No hidden fees or surcharges
Free cancellation up to 3 days before
Book

I travelled with my partner
Show all the reviews
like -31%

9.50 / 10 88 reviews
With this shuttle service between Ciampino Airport and Rome, you'll be in the centre of the Italian capital in less than an hour. The eternal city awaits you!
US$ 6.70
Book
like -31%, Skip the line