Check out all the activities in Santiago de Compostela

Discover the beautiful landscapes of Rías Baixas on this day trip from Santiago de Compostela: cruise on the Ría de Arousa and enjoy a wine tasting at Pazo de Rubianes. Unmissable! 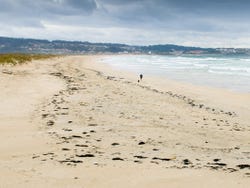 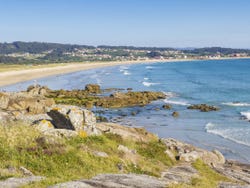 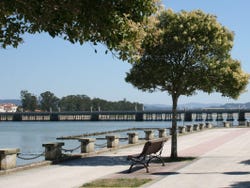 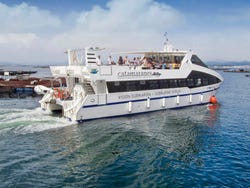 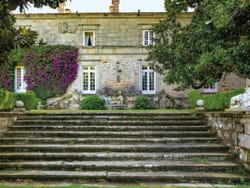 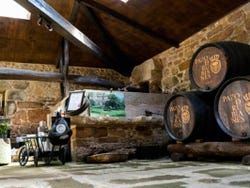 Ready to immerse your senses in the magic of Galicia? Meet your guide at 9 am at Praza de Fuenterrabía in the heart of Santiago de Compostela, and you'll soon be on your way to the province of Pontevedra.

After around a 40 minute drive, you'll make your first stop at Pazo de Rubianes, a historic palace dating back to the Middle Ages. Explore its botanical gardens, which are considered to be some of the most beautiful in the Rías Baixas thanks to their large collection of camellias. There are almost 4,500 of these flowers! Having admired Pazo de Rubianes, you'll be treated to a wine tasting, allowing you to indulge in the famous wines produced from the palace's vineyards - cheers!

Continuing on your excursion, you'll next head to La Lanzada Beach, which happens to be one of the longest stretches of sand in Galicia. Marvel at the spectacular Atlantic landscapes before making your way to the port of La Toja Island, where you'll embark on a catamaran cruise on the Ría de Arousa. As you sail down the river, you'll enjoy tasting of mussels accompanied by Albariño wine. Two of the most emblematic tastes of Galicia!

The boat trip will come to an end back at La Toja Island, and from there you'll head back on the road towards the picturesque town of Cambados. Here you'll have time to enjoy more of the famous Galician cuisine before exploring the town's coastline for panoramic views of Arousa Island and the surrounding villages.

At the end of an unforgettable day, you'll make the return journey to Santiag de Compostela, and you'll be dropped back off in Praza de Fuenterrabía at around 6 pm.

Please be aware that only adults over the age of 18 will be permitted to take part in the alcohol tastings.

US$ 59.60
No hidden fees or surcharges
Free cancellation up to 24 hours before the service starts
Book

Check out all the activities in Santiago de Compostela

9.60 / 10 2,592 reviews
Set off on a free walking tour of Santiago de Compostela and discover its emblematic landmarks and its history with an expert English-speaking guide.
Free!
Book
like

9 / 10 595 reviews
The stunning landscapes of Cape Finisterre and the beauty of the Costa da Morte coastline will take your breath away on this tour from Santiago.
US$ 36.80
Book
like New

9.80 / 10 31 reviews
Discover the historical centre of Santiago de Compostela with an exclusive guide who'll show you the main tourist attractions.
US$ 43.30 per group
Book