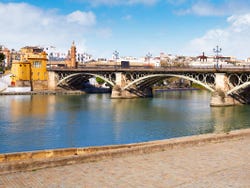 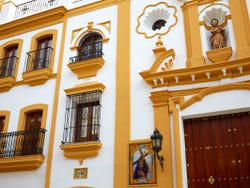 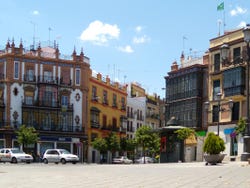 We'll meet behind the Torre del Oro, on Paseo Alcade Marqués del Contadero. From here, we'll walk into the neighbourhood of Triana, just on the other side of the Guadalquivir River.

We'll cross the Isabell II bridge, more popularly known as the Triana Bridge, one of the most popular hallmarks of the city. As we delve into the neighbourhood, we'll pass by the Chapel of Carmen, designed by Sevillan architect Aníbal González.

Once in the heart of Triana, we'll explore its origins: did you know that traditionally it was a neighbourhood of sailors, bullfighters and flamenco dancers? We'll also stop to admire the façade of the Santa Ana church: dating back to 1276, this is the oldest church in Triana.

As we wander through the lively, colourful streets, we'll also see the chapel that is headquarters to the Esperanza de Triana confraternity, as well as the local craft shops. Triana has long been famed for its excellent ceramics and pottery, you could even get yourself a souvenir here!

We won't just see what the neighbourhood is like these days, but our expert guide will explain all about the famous Trianeros that have made history over the years. These include Rodrigo de Triana, who accompanied Colombus on his voyage to America, and bullfighter Juan Belmonte. We'll also discover about Bartolomé de las Casas, who spend his life fighting against slavery, and Melchor Rodriguez García, who grew up in this neighbourhood before going on to be the "red angel" of the Spanish Civil War.

After discovering the charm and beauty of this historic neighbourhood, we'll finish the tour outside the San Jorge Castle Museum.

Please note that on this tour we will not enter any monuments, rather we'll see them from outside and our expert guide will tell you all about them.

If there are still places available, you can book until the previous day (local time in Seville).

US$ 15.20
No hidden fees or surcharges
Free cancellation up to 24 hours before the service starts
Book

Great guide Jordan. ..we were the only two people on this tour. Very informative and paced. Would recommend to see an untouristy traditional area of Seville .

Excursion to the Alhambra in Granada

8.80 / 10 234 reviews
Visit the Alhambra, one of Spain's jewels and the most visited attraction in the country: an unmissable sight for any visitor to Andalusia.
US$ 127.70
Book
like Free

9.30 / 10 149 reviews
Over 2,200 years Seville has lived an eclectic history of conquests, rulers, and clashing cultures. Take this tour of Christian, Muslim and Roman cultures.
Free!
Book
like

9.30 / 10 3,078 reviews
See the magic of Seville, and the Real Alcázar, the Cathedral and la Giralda, its three most important monuments, and symbols of the city.
US$ 46
Book