Discover the most traditional neighbourhood in Taipei and all of Longshan Temple's secrets with this free night tour.

Discover the most traditional neighbourhood in Taipei and all of Longshan Temple's secrets with this free night tour. 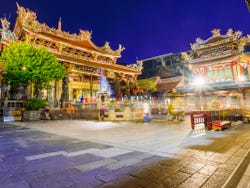 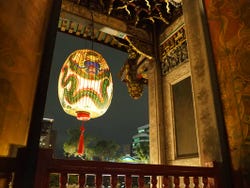 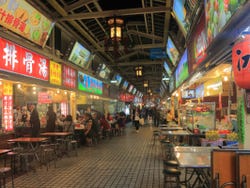 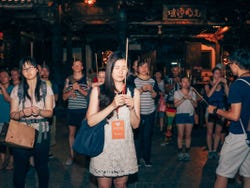 We'll meet at the metro station near Longshan Temple, the star of our free night tour, at sunset.

From here, we'll go to Mengxia Park while we learn about the history of the Wanhua district. Taipei's oldest district, originating in the 18th century, is home to iconic temples, historic buildings as well as its first and largest tea shop. Next, we'll arrive at the historic centre of Bopiliao and Herb Lane, where you'll have the opportunity to admire the architecture in two of the neighbourhood's most picturesque areas.

We'll then arrive at the Buddhist temple constructed in the 18th Century by Chinese settlers: Longshan Temple. The beautifully decorated place of worship is regarded as one of the best examples of Taiwanese architecture. In fact, even when the temple was destroyed several times by natural disasters, the last time being during the Second World War, the local people devoted themselves to rebuilding it using donations from the community. You'll learn more about the temple's long history, and how it embraces a mix of religions under the same roof, these being the Buddhist, Taoist and Confucian faiths.

After visiting the temple we'll continue the tour through the Wanhua neighbourhood and explore interesting areas such as Snake Alley and Taipei's Red Light District. Our last stop on this free tour will be Huaxi Street Night Market, which is one of the liveliest areas of the city and the best place to sample Taiwanese delicacies.

When the tour ends you'll set the price with your tip, depending on your rating of the guide's service.

Groups with more than 6 people aren't admitted on this free tour. If your group is bigger than this please contact us.

Minors should be accompanied by adults. There should be a maximum of three minors per adult.

Superb 3 hour visit with Vicky. Adorable, she was a top guide! Even beyond the visit, she offered to accompany us to the night market before leaving. I recommend !! Opinion translated. Show original.

10 / 10 1 review
Take an alternative tour around the Taiwanese capital and discover its notable monuments and corners of the city with this free tour around Taipei.
Free!
Book
like

10 / 10 3 reviews
Explore the city centre of the Taiwanese capital while you learn more about its history and most significant monuments with this free tour of Taipei.
Free!
Book