Check out all the activities in Verona

Immerse yourself in romantic Verona on this English-language walking tour. Whether or not you're looking for your Romeo or Juliet, you'll discover beautiful architecture, legendary history and magnificent cultural heritage. 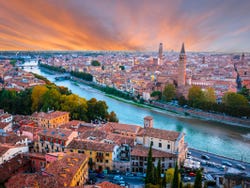 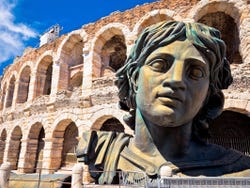 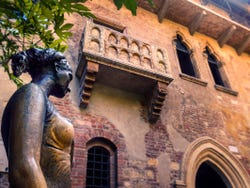 Meet your guide "in fair Verona, where we lay our scene...", or more specifically, in front of the equestrian statue of Vittorio Emanuele II in Piazza Bra. From here, you'll begin your walking tour of the romantic city, known for its Shakespearean associations, but magical for so many more reasons, going back to the days of the Roman Empire.

The first stop on your walking tour of Verona will be at the Arena. This 1st century BCE stone structure is considered the world's best-preserved Roman amphitheatre, and its incredible acoustics mean the venue still puts on concerts for thousands of people to this day!

From the Roman Arena, you'll make your way into the Middle Ages as you approach the imposing Castelvecchio and the Ponte Scaligero. The Gothic-style red brick fortified castle and bridge were originally built in  the 14th century by the tyrannical Medieval Lord of Verona Cangrande II della Scala.

You'll then delve deeper into Verona's ancient Roman heritage, visiting the beautiful 1st century Gavi Arch, which was destroyed during the French Napoleonic rule of Italy, before being painstakingly rebuilt in 1932. Feel like a true local wandering around the Piazza delle Erbe, a cafe-lined town square that has remained the centre of city life since being the Forum during Roman times. Admire the spectacular buildings that surround it, from important council buildings to symbols of Verona's history.

Your walking tour route will then take you to a magnificent example of Gothic architecture: the Scaliger Tombs, ornate stone arches which represent a funerary monument to the Medieval rulers of Verona, before bringing you to Piazza dei Signori, a city square surrounded by lovely Renaissance buildings.

The tour will come to an end at one of the sights for which Verona is most famous, the iconic stone terrace known as Juliet's Balcony. Don't forget to ask your guide for their tips on how to continue enjoying the best of Verona! Now... wherefore art thou Romeo?

If you'd prefer to visit this beautiful Italian city with an exclusive English-speaking guide just for you and your group, why not reserve a private tour of Verona instead?

Check out all the activities in Verona

9.20 / 10 335 reviews
Stroll down charming Medieval streets, marvel at the Roman amphitheatre and be enchanted by the romantic atmosphere of Verona on this free walking tour​.
Free!
Book
like

9 / 10 27 reviews
Our hop on hop off sightseeing bus through Verona is the perfect way to explore the essential landmarks and monuments of the enchanting Italian city.
US$ 21.60
Book
like

10 / 10 2 reviews
Go on this spectacular day trip for the chance to discover the Dolomite Alps.
US$ 205
Book