Historical buildings, skyscrapers, street art and many architectural styles; join us and discover why Sao Paulo is such a captivating city. 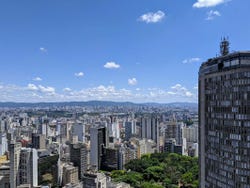 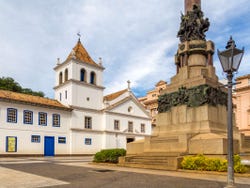 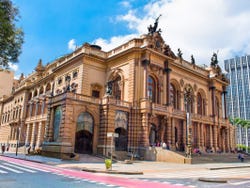 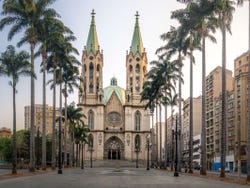 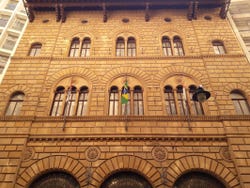 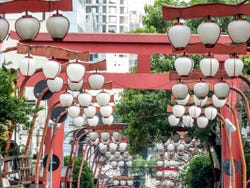 We'll meet in front of the Italia Building at the time of your choice to start a guided tour of the historical centre of Sao Paulo and Liberdade.

We'll start the route walking between the skyscrapers of Sao Paulo: the Italia Building, the Copán Building and the Hilton Building. Afterwards, we'll continue walking until we reach the Sé Cathedral, in the historical centre of the city. Did you know that it is the fourth largest Gothic church in the world? The next stops will be at the Monastery of San Benita, the Church of San Francisco and the Church of Beato Anchieta, also known as Patio do Colegio.

We'll then visit the first skyscraper in Brazil, the Martinelli Building, and continue our tour of the historic centre to see the exterior of the Sao Paulo Theatre and the Altino Arantes Building, which will surely remind you of New York's Empire State Building!

The next part of the route will be in the Japanese quarter of Sao Paulo: Liberdade, the largest Japanese community outside Japan! Among its streets, we'll visit the Afligidos Church and its colourful Japanese garden: a sea of tranquility in the city.

After three hours the tour will end in Liberdade Square.

What a great tour! Luiz is a great guide and such a nice guy. He took me on a personal tour of São Paulo, touching on numerous wonderful sights of this lively city. Some road closures prevented us from seeing some things (totally outside of anyone's control) but Luiz had great suggestions on alternative sights, and is generally flexible on the itinerary. In general, a great experience for anyone who is new to São Paulo with a guide who goes the extra mile!

Excellent tour with Rocco !! Thanks for showing us the beauty of this huge city !!! Opinion translated. Show original.

Incredible the tour I got to know the city of São Paulo in one day! Unique experience Opinion translated. Show original.

10 / 10 6 reviews
With this day trip to Santo Amaro Island, you'll visit three wild beaches on the coast of Sao Paulo and you'll discover that heaven on earth does exist!
US$ 76.60
Book
like

No rating yet
Discover the Brazilian city from a different point of view with this Sao Paulo City Tour. Don't miss the most important monuments and essential attractions.
US$ 46.10
Book
like

9.50 / 10 22 reviews
Enjoy a day exploring the coast of Sao Paulo, discovering the incredible beaches and cities of Santos, Sao Vicente and Guarujá.
US$ 68.20
Book