There is no better way to discover the most emblematic places in the historic centre of the capital of Azerbaijan than on this guided tour. 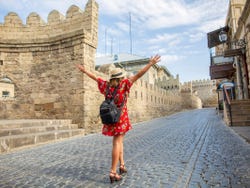 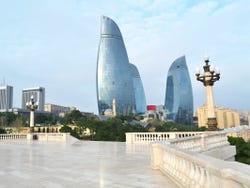 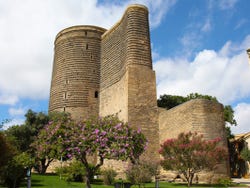 We offer two guided tours of Baku, so you can choose the option that you like the most:

Tour of the Old City (3 hours)

At 10 am, we'll come and pick you up from your hotel and head towards the Old Town of Baku, also known as Icheri Sheher. Once there, we'll start our guided tour of the unique, traditional neighbourhood in the capital city. This walled city, dating back to the 12th century, was declared a UNESCO World Heritage Site in the year 2000, and it's sure to impress.

You'll be able to see the ruins of the old Persian baths, minarets, huge mansions and tea rooms. One of the most important monuments that we'll visit is the Maiden Tower, an eight-storey cylindrical building that's a symbol of the city. Not only that, but we'll also visit the Palace of the Shirvanshakh, built in the 15th century and considered as one of the gems of Azerbaijan architecture. This is not to be missed!

Next, we'll take you to Multani Caravanserai and Bukhara Caravanserai, do you know what these were used for in the Middle Ages? We'll tell you this and more! We'll then finish our private guided tour in Square Bazaar, an incredible market where you can brush shoulders with the locals and get a sense of life in the city.

Tour of the Old City and Highland Park (4 hours)

With this option, we'll take you on the same tour of the Old City, but then you'll have the chance to add an extra hour on to your tour and we'll take you to visit Highland Park, one of the city's best viewpoints. Don't miss out on these wonderful views of Baku!

Tour of the Old City

Transport to and from the hotel (4 hour tour).

10 / 10 2 reviews
Discover the green mountainous landscapes of northern Azerbaijan with this day trip to the capital of Quba and a the village of Khinalug.
US$ 312.90 per group
Book
like

9 / 10 2 reviews
Discover the most famous mud volcano in Azerbaijan with this private tour of the Gobustan National Park and the Bibi-Heybat Mosque.
US$ 215.80 per group
Book
like

8 / 10 1 review
Explore the history and craftwork of Azerbaijan with this private tour of the National History Museum and the interesting Carpet Museum.
US$ 124.10 per group
Book