Immerse yourself in the elegance of the Baroque world on this private tour of the Royal Palace of Caserta. Exquisite decor, magnificent architecture and enchanting gardens await you!

Immerse yourself in the elegance of the Baroque world on this private tour of the Royal Palace of Caserta. Exquisite decor, magnificent architecture and enchanting gardens await you! 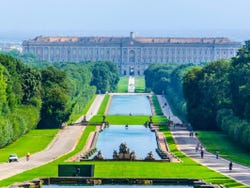 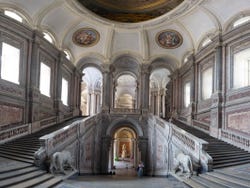 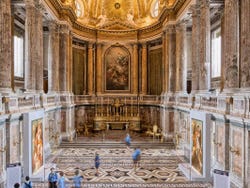 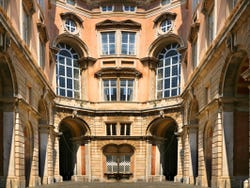 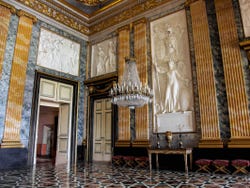 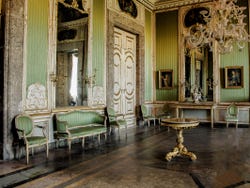 Private Tour of the Royal Palace of Caserta

Located just 20 miles (32 km) north of Naples is one of the largest royal residences in the world and a superb example of Baroque architecture: the Reggia di Caserta. Built in the 18th century by the House of Bourbon, the Spanish monarchs who were ruling present-day Italy at the time, the Royal Palace of Caserta is an enormous building of 1200 rooms set in lavish gardens. After meeting your guide and getting your entrance tickets, you'll delve deep into its fascinating history.

Visit the different chambers of the Royal Palace, admiring the elegant interior decor that bears witness to the wealth and extravagance of its inhabitants. Inspired by the Palace of Versailles, the interior and exterior architecture and decoration of the Reggia di Caserta is a fusion of Baroque, Neoclassical and Pompeiian influences, the latter owed to the rediscovery of the devastated ancient city while the palace was being built.

Your guide will reveal all about the various monarchs who called Caserta home while you explore the Palatine Chapel, one of the artistic gems of the palace, the royal apartments and even the theatre!

Please bear in mind that the price of this tour does not include the entrance fee for the Royal Palace of Caserta. The palace ticket is 10 Euros per person, and the palace and garden ticket is 14 Euros per person (both free for children under 18 years old) and should be paid on the day.

Private tour of the Royal Palace

English speaking guide with expert knowledge of Caserta's history. Private and exclusive tour, there will be no one else in the group.

Entrance to the Royal Palace of Caserta (from 25 Euros per person, free for under 18s).

Maria Laura has been an excellent guide! Impeccable Spanish and a command of all the history and architecture of the Site we visit. The palace and gardens are spectacular !! Opinion translated. Show original.