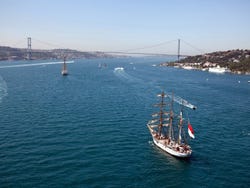 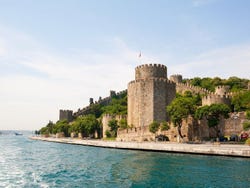 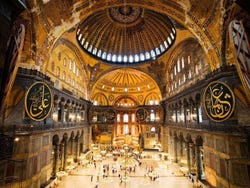 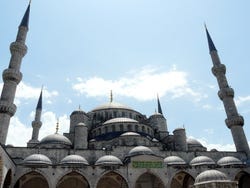 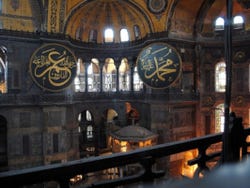 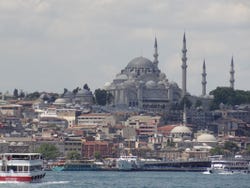 After collecting you from your hotel at 9 am, the bus will drive you to the colorful Spice Bazaar, located very near the famous Galata Bridge.

The Spice Bazaar is, without a doubt, one of the best places in Istanbul to purchase authentic Turkish products. Marvel at the numerous stands overflowing with items of all shapes and sizes.

Once you’ve wandered through the Bazaar in Eminönü, in the heart of the city, make your way to the pier where you will board a comfortable cruise boat. Take a seat and enjoy the views of Istanbul from the waterway as you sail down the Bosphorus Strait. If you look to the east you will see the Asian side and to the west, the European side.

Wooden houses, palaces, fortresses and enormous bridges sit on the both sides of the Strait, which connects the Black Sea with the Marmara Sea.

After a 1.5-hour cruise, we'll go to a traditional restaurant where we'll eat a complete menu consisting of soup or cold appetizer, börek, chicken, meat or vegetable kebab with rice and baklava or fruit.

With your energy renewed, we'll move on to the next stop of the tour, the Hippodrome of Constantinople, built as a sporting center of Constantinople and later transformed into a resting place for the Ottomans.

Afterward, we'll head to one of the city’s most emblematic landmarks. The Blue Mosque (Sultan Ahmed Mosque) is considered by many as the epitome of Ottoman architecture. Its enormous dome, six minarets and its striking Iznik tiles decoration is breathtaking.

Cross Sultanahmet Square and enter the Hagia Sophia, the gem of Istanbul. This incredibly big edifice was used as a church for 916 years and as a mosque for the following 477 years. Finally, it was transformed into a museum in 1936.

The tour comes to an end either in the centre of Sultanahmet or Taksim, as you prefer.

If you prefer bringing your own lunch or you'd like to go to some other restaurant on their own, you can book the tour without lunch option, for € 10 (US$ 11.40) less.

If you are staying elsewhere in other areas, you will have to go to the meeting point located at The Marmara Taksim Hotel 5*.

Priority access to the landmarks you visit on the tour.

From
US$ 67.30
Free cancellation up to 48 hours before the service starts
Book

We were lucky to get a guide just for the two of us having a lovely time and getting a lot of tips and interesting info about the city, history, markets and all you can imagine. Thanks Mehmet!

"Monica" is a wonderful guide, clear and with a very good spirit and humor. It has made the tour very enjoyable and interesting. Opinion translated. Show original.

All the activities, including lunch, were satisfactory. Two things to comment, on the one hand the dedication and passion for his work of the local guide, very good Spanish, and on the other a recommendation for other editions, perhaps while the rehabilitation of the Blue Mosque lasts, they should replace the visit to this center for another activity, since you can practically not appreciate the interior. Opinion translated. Show original.

A shame the works in the blue mosque but everything is compensated by the attentions of the guide Tania, not only for her explanations but for her dedication and care of the group. Very responsible. An excellent professional Opinion translated. Show original.

9.40 / 10 10 reviews
Cruise along the Bosphorus and see landmarks including Galata Tower and Bosphorus Bridge. When you get to the Black Sea, take a swim and enjoy lunch on board.
US$ 74.10
Book
like

7.90 / 10 20 reviews
Enjoy breath-taking views of Istanbul from the Bosphorus as the sun sets, enjoying an exquisite dinner and traditional Turkish music and dancing.
US$ 51.30
Book
like

7.90 / 10 36 reviews
The Sufi whirling, also known as Sama, is one of Turkey's best-known and most inspiring ceremonies. This 800-year old tradition is a personal and mystic voyage.
US$ 29.60
Book