Ancient monasteries and breathtaking natural landscapes: discover the magic of the Dragon Kingdom on this six-day tour of Bhutan from Paro. 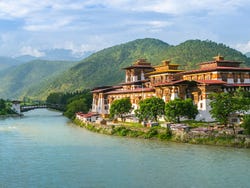 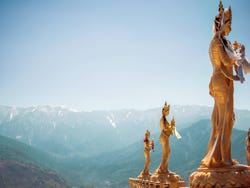 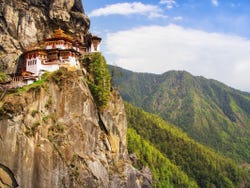 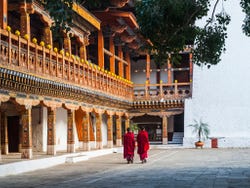 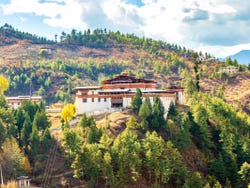 On the first day of your tour, we'll be waiting for your arrival in Paro International Airport, ready to take you to Thimphu, the capital of Bhutan. Before dropping you off at your hotel, we'll make a stop at Chuzom, where the Thimphu and Paro rivers meet, and admire the Tschogang Lhakhang Temple located nearby.

Arriving in Thimphu, you'll have the rest of the day free to relax and explore the city at your leisure. We recommend strolling down Main Street and visiting the local craft bazaar to discover Bhutan's beautiful traditional arts.

Having had breakfast at the hotel, we'll head out on a sightseeing tour of the Thimphu Valley to immerse ourselves in Bhutan's fascinating history and culture. We'll get to see the National Library, home to an impressive collection of priceless Buddhist texts; the Institute for Zorig Chusum, where students learn about Bhutan's thirteen traditional arts and crafts; and the Textile Museum, where you'll learn about one of the country's most distinct art forms. We'll also visit a living museum known as Simply Bhutan, which will immerse us in the cultural heritage of the Bhutanese people.

After lunch, we'll make a short drive to Pangri Zampa, one of the oldest monasteries in Bhutan, before stopping at Buddha Point, also known as Kensal Phodrang, where we'll enjoy unparalleled panoramic views of Thimphu Valley. Our next stop will be the Memorial Chorten, a striking religious landmark where you'll see people from all walks of life chanting their mantras and spinning the colourful prayer wheels. Finally, we'll visit the Tashichho Dzong, a Buddhist monastery and fortress, before returning to the hotel, where you'll have the evening free to spend as you please.

Following breakfast, we'll set off towards Punakha. During the route, we'll cross the Dochula pass, which at over 10,100 feet (3080 metres) in height offers spectacular views of the eastern Himalayas on a clear day. We'll stop to stretch our legs and enjoy a walk up to Chimi Lkakhang, a temple of fertility located atop a small hill. The trail, which takes around an hour and a half, will take us through rice paddies and tiny villages, allowing us to see what daily life is like in the area.

Arriving in Punakha, we'll check into our hotel, before heading back out again to visit the Punakha Dzong, a majestic riverside palace-fortress. You'll then have free time to explore the village at your own pace.

Waking up to breakfast at the hotel, we'll hit the road again back to Paro, stopping en route at Simtokha Dzong, whose sacred shrines are said to bring solace and peace of mind to those who visit.

Once we've settled into our hotel in Paro, we'll embark on a tour of the city's most important places of interest. Visit Ta Dzong, a former watchtower now housing the National Museum and its extensive collection of historic artefacts, from paintings and textiles to weapons and armour, and much more. We'll then visit Rinpung Dzong, a monastery where we'll discover fascinating history and Buddhist lore through the antique paintings lining its walls.

On day five of our adventure, after an energising breakfast, we'll set off on a five hour trek to Taktsang Monastery. Perched on a cliffside almost 3000 feet (900) metres) above the valley floor, it is one of the most famous and iconic in Bhutan. It is said that Guru Rinpoche reached the sacred place on the back of a tiger, earning it the name "Tiger's Nest Monastery".

On the way back to Paro after our hike to this incredible place, you'll have the opportunity to do an optional activity and stop at the historic fortress of Drukgyel Dzong, where Bhutanese warriors fought Tibetan invaders centuries ago. From the road to the Dzong, you'll be able to see the snow-capped peak of the sacred Jomolhari, or Mountain of the Goddess. For the finishing touch on your day, we'll visit Kyichu Lhakhang, a temple built in the 7th century and marking the introduction of Buddhism to Bhutan.

After one last breakfast at the hotel, we'll take you to Paro Airport so you can catch your onwards flight after an unforgettable tour of Bhutan.

Our Bhutan Tour Package includes five nights' accommodation with five breakfasts, five lunches and five dinners, transfers to and from Paro International Airport and transport around the country. An English-speaking guide throughout the tour and all entrance fees to monuments described in the itinerary are included. We also include the visa fee for entering Bhutan.

The only thing you'll need is flights to Paro arriving on the day you've booked to start your tour and departing on the last day of the tour: if you arrive on a Saturday, you should book your onwards journey for the Thursday. We recommend booking flights well in advance as places are limited.

This six-day tour package includes five nights' accommodation in the following 3* hotels. You can book a double room for two people or a single room:

Please note that the order of the itinerary of this six-day tour package is subject to variation due to the closure of monuments on certain days.

The minimum age to take part in this activity is 10 years old.

All entrance fees to monuments described in itinerary.

You can book up to 14 days before (Paro local time) if there are still places available.

from
US$ 1,804
No hidden fees or surcharges
Book

New
Discover all the south Asian country has to offer with this Bhutan Tour Package: 5 Days. You'll visit the most important temples, monuments and monasteries.
US$ 1,083 per group
Book
like New

New
With this Bhutan Tour Package lasting 8 Days, we'll visit the country's most beautiful locations including Paro, Thimphu, Punakha, Phobjikha.. and much more!
US$ 1,859 per group
Book