Discover the fascinating history of the captivating city of Sarajevo, when you take this fantastic panoramic tour. Along the way, you will encounter the city's important landmarks and trace the events that led to the disintegration of the country. 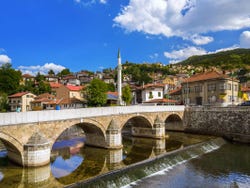 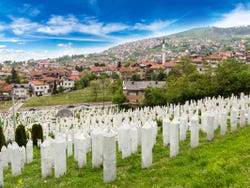 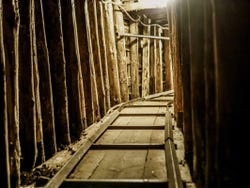 After collecting you from your accommodation, we will begin our tour through Sarajevo, and, as we enter the old town, you will step back in time to learn what life was like in the city before the disintegration of Yugoslavia.

Visiting the Yellow Bastion fortress, we will admire a complete panoramic view of the city. We will also get to know the Olympic Complex, which hosted the 1984 Games.

We will continue to the Defenders of Sarajevo cemetery where hundreds of soldiers who fought during the siege of the city rest, we will know the history of Romeo and the Juliet of Sarajevo.

Our next stop is the so-called Tunnel of Hope, which was the escape exit built during the siege of the city. You will put yourself in the shoes of the citizens who passed through the tunnel in search of freedom between 1992 and 1996.

Finally, we will visit Trebevic, the Olympic mountain, where we continue discovering what the celebration of the Olympic Games meant for the city.

At the end of the tour, we will accompany you back to your hotel.

Hotel pick up and drop off in Sarajevo.

US$ 35.60
Free cancellation up to 24 hours before the service starts
Book

10 / 10 7 reviews
Discover the most important spots around the city which has experienced many wars, including the First World War, with this Sarajevo Free Walking Tour.
Free!
Book
like New

9.70 / 10 13 reviews
This guided walking tour of Sarajevo is the best way to explore the political, financial, social and cultural centre of Bosnia and Herzegovina.
US$ 20.70
Book
like New

During the Bosnian War, an 800-metre long underground structure was built for people to escape from the capital, Sarajevo. Discover its history on this tour of the Tunnel of Hope​.