On this boat trip along the coast of São Miguel, you'll admire whales and dolphins that live in Azorean waters. What's more, you'll sail the waters of the famous islet of Vila Franca do Campo.

On this boat trip along the coast of São Miguel, you'll admire whales and dolphins that live in Azorean waters. What's more, you'll sail the waters of the famous islet of Vila Franca do Campo. 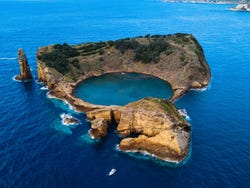 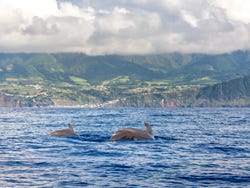 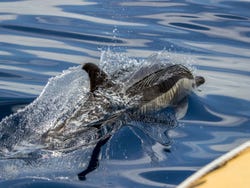 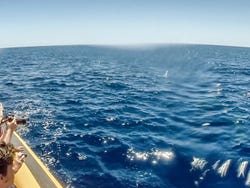 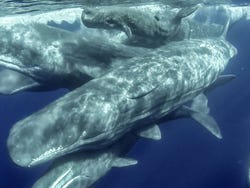 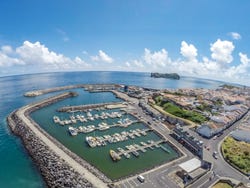 At the agreed time, we'll meet at the port of Vila Franca do Campo. At this dock, located south of São Miguel Island, we'll first have a brief theoretical introduction to local wildlife. After which we'll learn about the safety guidelines and rules that must be followed while on high seas. Then, we'll board a zodiac boat ride to try to spot whales and dolphins in this area of the Azores.

This Portuguese archipelago in the North Atlantic is home to a wide range of marine wildlife, especially blue and humpback whales, and bottlenose dolphins. What's more, it's also home to a large colony of other mammals such as sperm whales and pilot whales.

On the boat, we'll be accompanied by a naturalist guide expert in Azorean wildlife, who will show us how to distinguish certain species from others. Did you know that just by paying attention to small details such as the size of the tail and fins or the color of the skin, we can tell the difference between one specimen and another?

After enjoying our whale watching experience on the coast of São Miguel, we'll sail next to the islet of Vila Franca do Campo. While sail around this small volcanic island, we'll be able to admire its spectacular caldera. If conditions are favorable, we'll also see different kinds of seabirds such as Cory's shearwater or the black-footed tern.

Lastly, after three hours sailing the Atlantic, we'll return to the departure dock.

The coast of São Miguel Island is one of the best places in the Azores to see whales, dolphins, and other cetaceans. However, animals are unpredictable. The sighting of a greater or lesser number of specimens will depend on various factors such as the weather conditions at the time or the reproduction and breeding seasons of each species.

The capacity of all means of transport will be reduced to 66% of their maximum capacity.

Waterproof suit for the tour.

US$ 62.20
Free cancellation up to 24 hours before the service starts
Book

Port of Vila Franca do Campo

All very efficient and nice. As per the voucher, there was no guide in Italian. Unfortunately we did not see whales (whatever they say, I think it is very rare to see them), but many dolphins. Opinion translated. Show original.

Very fun and exciting experience and it fully met our expectations as we saw sperm whales and dolphins. The treatment by all the wonderful team. Opinion translated. Show original.

10 / 10 3 reviews
Drift along the idyllic waters of the Atlantic to the islet of Vila Franca do Campo with his fantastic kayak tour.
US$ 50.90
Book
like

No rating yet
Sail from São Miguel to Vila Franca and enjoy a hiking tour of this tiny volcanic islet in the Azores, where you will discover a variety of incredible birds!
US$ 40.70
Book
like

No rating yet
Discover the beautiful marine seabed in the Azores archipelago during this snorkeling experience in São Miguel. Ready to explore the incredible underwater world?
US$ 53.40
Book