The Ateshgah fire temple and Yanar Dag mountain; on this private tour around the Absheron Peninsula you'll discover some of the stunning, unimaginable places near Baku. 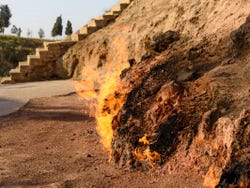 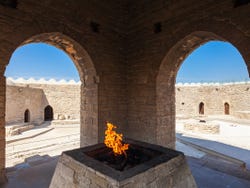 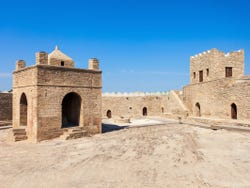 Our private tour will leave from your hotel at 10 am, and from there we'll take you to Villa Petrolea, a historic district built by the Petroleum Production Company Nobel Brothers at the end of the 19th century.

Our next stop will be in the north of the Absheron Peninsula, interestingly, the name "Absherson" comes from the Persian word meaning salty waters. Here, we'll visit the Ateshgah fire temple, also referred to as the Ateshgah of Baku, which was named as a UNESCO World Heritage Site in 2007. Known as the temple of the three religions, Ateshgah has been a sacred place for Hindus, Sikhs and Zoroastrians. Built by Indians living in the area between the 17th and 19th centuries, this is a must-see on your trip to Baku.

After the guided tour of the temple, we'll head to Yanar Dag and after about a 30-minute journey, we'll reach the curious Fire Mountain. Literally translated as "burning mountain", Yanar Dag is a natural gas fire which continuously blazes on the mountainside. This is your chance to see a true natural phenomenon.

At the end of the tour around Yanar Dag, we'll return to Baku and drop you back at your hotel.

Private tour, there won't be anybody else in the group.

Per group from
US$ 206.60
No hidden fees or surcharges
Free cancellation up to 3 days before
Book

10 / 10 2 reviews
Discover the green mountainous landscapes of northern Azerbaijan with this day trip to the capital of Quba and a the village of Khinalug.
US$ 323.80 per group
Book
like

9 / 10 2 reviews
Discover the most famous mud volcano in Azerbaijan with this private tour of the Gobustan National Park and the Bibi-Heybat Mosque.
US$ 223.30 per group
Book
like

8 / 10 1 review
Explore the history and craftwork of Azerbaijan with this private tour of the National History Museum and the interesting Carpet Museum.
US$ 128.40 per group
Book