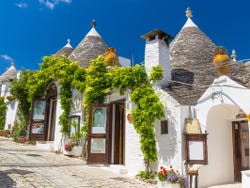 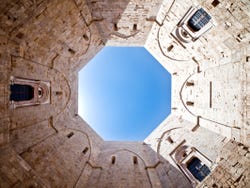 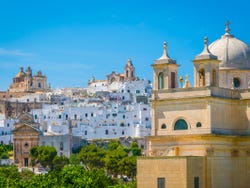 The tour will start from the agreed meeting point in Bari. After getting settled into the hotel, we'll visit the historic centre of Puglia's capital and explore the alluring narrow streets. This will take us to the San Nicola Basilica and the Normanno-Svevo Castle, built in the 12th century by the Norman King Roger II and reconstructed by Frederick II. From here we'll admire impressive views of Bari.

Following on, we'll wander through the Piazza Mercantile and see the ancient Column of Justice. Later, we'll have dinner and head back to the hotel.

After breakfast, we'll board a bus towards Trani, a medieval city known as the 'Pearl of Puglia' and discover the Jewish quarter as well as its marvellous white stone cathedral. Later in the afternoon, we'll go to Castel del Monte, one of the most visited locations in the south of Italy. It boasts a fortress with remarkable geometry and hidden secrets.

The tour will continue on to Alberobello, named a UNESCO World Heritage site because of its 'trulli' (the 14th century whitewashed stone huts with cone-shaped roofs). You'll feel like you're in a fairytale as you walk through the small village. As the sun sets we'll spend the night and have dinner in a traditional 'trullo'.

In the morning we'll make our way to Matera. Here you'll be surprised by the intriguing architecture of the 'sassi di Matera'. These ancient cave dwellings were first used as homes over 9,000 years ago. We'll also visit the Romanesque Cathedral from which you'll admire spectacular views of the 'sassi'. In the evening we'll go back to Alberobello.

On the fourth day, we'll discover two charming villages. The first stop will be Locorotondo, where you'll have free time to explore another 'white city' in Puglia.

Afterwards, we'll go to Ostuni, which dominates the coastal plain and stands out in the centuries old olive trees valley. You'll have the opportunity to enjoy the city and sample some local products at your leisure, such as olive oil. Later, we'll get back on the bus towards Lecce, where we'll have dinner and stay the night.

We'll have breakfast and spend the morning enjoying a guided tour of Lecce, located in the heart of the Salento region. The tour will take us through the old town and its symbolic landmarks including the 12th century Cathedral, the Santa Cruz Basilica and the Duomo Square.

Next, we'll head to Otranto, which you'll be free to explore at your own pace. You'll find remains of different villages including Greek, Roman and Turkish. We recommend stepping inside the cathedral to admire the mosaics that rival that of Ravenna in terms of wealth. In the afternoon, we'll make our way to Supersano, where the day will end with a dinner in the 'Masseria le Stanzie'. In this old farm, we'll learn how pasta is produced in the region. Then we'll go back to Lecce.

Once we've had breakfast at our hotel in Lecce, the tour will end. If you would like to book a transfer to Bari, you can contact us when booking.

You can book up to 7 days before (Bari local time) if there are still places available.

US$ 1,828
No hidden fees or surcharges
Free cancellation up to 15 days before
Book

10 / 10 3 reviews
Take this private tour of Bari with an expert English-speaking guide and discover the intruiging secrets of this fascinating city!
US$ 122.10 per group
Book
like Free

7.60 / 10 10 reviews
Lose yourself in Bari's picturesque Medieval streets and immerse yourself in its legendary history on this free walking tour of Bari.
Free!
Book
like

No rating yet
Travel back in time on this guided walking tour of Bari's historic castles and fortresses! Discover some of the most emblematic monuments in the Apulian city.
US$ 26.60
Book