Leave the Muggle world behind and climb aboard the Hogwarts Express! At Warner Studios you'll have the opportunity to pass through Diagon Alley, see the Gryffindor Common Room and feel a part of the Harry Potter universe. 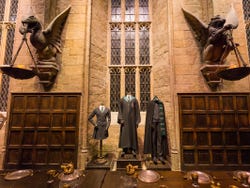 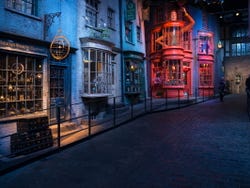 We'll pick you up at one of the various meeting points around Birmingham and hit the road towards London, where the Warner Studios can be found. After a journey of around two and a half hours, we'll arrive at this parallel universe where potions, spells and the dark arts are the order of the day.

In the very place where one of the most famous film sagas in history was shot, we'll follow in Harry's footsteps, from his tiny room under the stairs, up to his... well, nobody likes spoilers!

During the tour of the studios you'll pass through Diagon Alley, see the Chamber of Secrets, visit Dumbledore in his office and chat with your friends in the Gryffindor Common Room. And you can't miss the opportunity to start the new school year in the great hall!

As well as passing through Hogwarts itself, you'll see the accessories used in the films, the original costumes, and personal effects of Harry, Ron and Hermione. And you'll also learn how the special effects work, and how the different magical creatures came to life.

Having enjoyed our time in the wizarding world, we'll return to Birmingham, arriving around 6:30 pm.

When making the reservation you can choose one of the following meeting points in the city:

If you don't want to miss any detail when touring the studios, you can rent an audio guide for just £4.99.

Entry to the Warner Brothers Studios

10% discount on the official ticket price.