Greeks, Romans... the cultural legacy of Alexandria can be seen in every one of its monuments and archaeological sites. immerse yourself in the past with this excursion from Cairo. 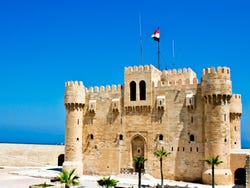 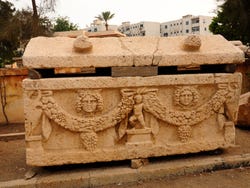 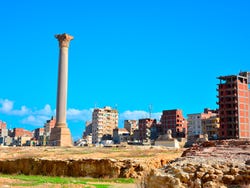 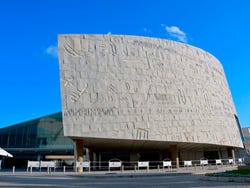 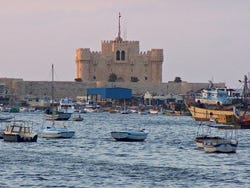 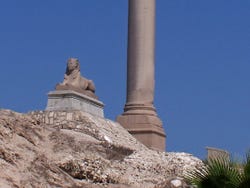 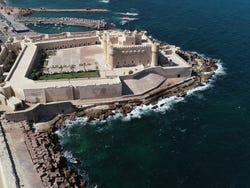 At 6:30 in the morning we'll leave from Cairo towards Alexandria, the most important Mediterranean city in Egypt.

We'll begin our tour of the Alexandria port, visiting the Qaitibay Citadel. This defensive complex was constructed in the 15th century by the Sultan Qaitibay, where the famous Lighthouse of Alexandria once stood. The lighthouse was destroyed by several earthquakes, whose remains were then used to build the citadel.

Then we head to the south of the city, where we'll head to the Kom el Shoqafa Catacombs, where the relief artwork shows the fusion of Egyptian and Greco-Roman culture. We'll see its three different levels, to get to know its passages, tunnels and galleries along which the tombs of the necropolis are distributed. near these catacombs can be found Pompey's Pillar, just where the temple dedicated to the Greco-Egyptian God Serapis was once found.

We'll then enjoy lunch in the centre of Alexandria, with a menu including fish, and seafood rice. Then in the evening we'll see one of the most important modern buildings in the city: The New Alexandria Library. Built in homage to the library, built in the 3rd century BC and burnt down, perhaps during the Roman Civil War in 48 BC, which housed thousands of papyrus scrolls and was one of the world centres of scholarship and knowledge in the ancient world. Today the library, reinaugurated in 2002, is one of the most important cultural spaces in the Eastern Mediterranean.

Finally, late in the evening, we'll return to the hotels of Cairo.

The New Library of Alexandria will not be visited on Fridays and Saturdays as it is closed on these dates.

Entry to the Qaitibay Citadel and the Kom el Shoqafa Catacombs.

Entry to the New Alexandria Library.

US$ 104.20
Free cancellation up to 48 hours before the service starts
Book

The arrangement is very nice, my train arrival was late about 1 hour but the tour guide still wait and keep schedule

The best experience we had in Egypt. Great value and wonderful service!!! Our guide, Mohammed, and the driver went out of their way to make my husband and I feel special. The places are beautiful with a lot of history. The Alexandria Library is awesome and the Citadel is magnificent! We had lunch in a very nice restaurant looking the Mediterranean Sea.

Everything was super good, our guide Husam (I hope I'm not wrong) told us the history of the Greeks in Egypt, we went to Pompey, then to the Qaitbay fortress, spectacular view of the Mediterranean Sea, lunch was delicious, we really had a great time The only thing because of the covid we did not manage to enter the main room of the Alexandria library, but we managed to see something, it is worth knowing Alexandria. Opinion translated. Show original.

Second day of the Tour with our Guide Mohamed, this time it was time to visit Alexandria with the challenge that traveling now represents in times of Covid, prior to the trip we had to do our PCR TEST to be able to travel back to Dubai. Mohamed completely helped us with the test process and even collecting the result at the hospital the next day. Excellent service attitude, Congratulations on having staff like Mohamed in this agency, the visit had to be shortened but it was very good. Opinion translated. Show original.

8.30 / 10 93 reviews
This package takes in the Great Pyramid of Giza, the Philae Temple, the Edfu Temple, Cruising on the Nile and relaxing on the shores of the Red Sea.
US$ 1,102
Book