Discover some of the most famous and most incredible places and monuments in Cairo, places that leave the traditional tours behind. 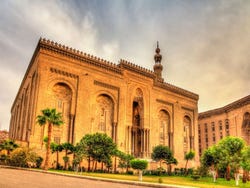 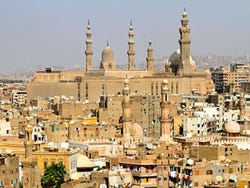 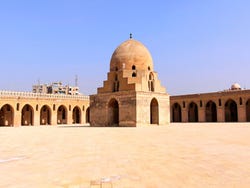 Having picked you up from your hotel at 9 am, we'll make our way to the Midan Al Qalaa, in the historic centre of Cairo

Our first stop will be the Al-Rifai Mosque, also known as the Royal Mosque, a modern mosque from the 19th century.

In the same neighbourhood, you can also find the Mosque and the Madrasa of Sultan Hassan, built in 1361. These monuments are considered among the grandest buildings constructed during the Mamluk period, an era of Ottoman splendour in Egypt.

Our next visit will be the Ibn Tulun Mosque, the largest and oldest in the city. It was built between the years 876 and 879 in the old city of Al-Qatta´i, under the auspices of Ahmad Ibn Tulun.

Having discovered the mosques we'll eat in a typical restaurant, with a menu including different types of salad, a main dish (beef, fish or chicken), rice, pasta and vegetables, as well as a selection of desserts and fruit.

The tour then continues visiting the Gayer-Anderson Museum and passing along the famous walls of the city, this street being the one with the most monuments from the era worldwide.

With the tour over, we head back to your hotel.

Entry to all monuments visited.

US$ 76.50
Free cancellation up to 48 hours before the service starts
Book

8.30 / 10 93 reviews
This package takes in the Great Pyramid of Giza, the Philae Temple, the Edfu Temple, Cruising on the Nile and relaxing on the shores of the Red Sea.
US$ 1,095
Book