Fall in love with Egypt on this excursion to the Giza pyramids, the Saqqara necropolis and Memphis, once the capital of the country. Our Egyptology expert will take you back almost 5,000 years to the land of the pharaohs... 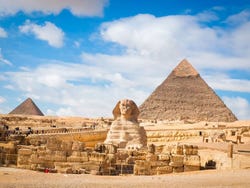 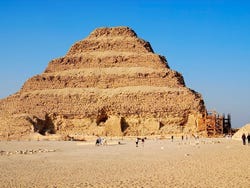 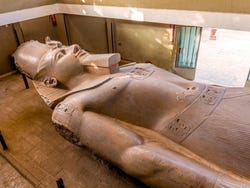 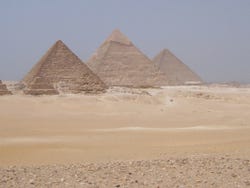 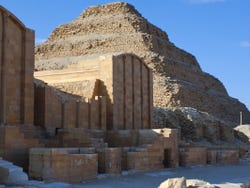 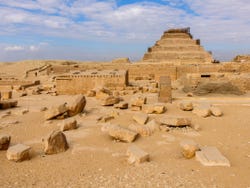 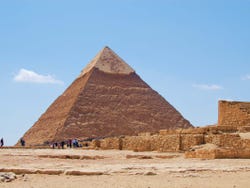 We'll pick you up from your hotel first thing in the morning, hitting the road towards Giza, a city found 20 kilometres from Cairo.

Once there we'll have three hours to enjoy sights that will be permanently etched in your mind's eye - the Sphinx, and the three largest and most famous pyramids in the country, built for the pharaohs Khufu, Khafre, and Menkaure.

At lunchtime, we stop to enjoy a typical menu which includes, among other dishes, delicious grilled chicken kebabs with vegetables, hummus, tahini, and Arabic bread. For dessert: sweet pastries and a refreshing fruit salad.

Then, with energy to face the afternoon, we'll make our way to the Saqqara necropolis, one of the most important links we have to the history of ancient Egypt where, amongst other things, you can see the pyramid of Djoser: the first of Egypt's great pyramids.

In Saqqara we'll also visit the tomb of vizier Mehu, which was recently opened to the public for the first time since its discovery in the 1940s. This high ranking official in the sixth dynasty was buried with honours away from the reach of tomb robbers, meaning the hieroglyphs which decorate it are still exceptionally well conserved.

Our final stop will be Memphis, the old capital of Egypt, a real open-air museum where you can see, among other monuments, the impressive 83 ton, 11-metre tall sculpture of Ramses II and the Alabaster Sphynx.

The tour then ends back at your hotel.

See the inside of the pyramids

Entry to the Khafra and Menkaure pyramids (100 Egyptian pounds, about 6 USD).

You can book up to 2 days before (Cairo local time) if there are still places available.

US$ 71.20
No hidden fees or surcharges
Free cancellation up to 48 hours before the service starts
Book

The tour is great and food is delicious

The guide was extremely kind, we enjoy the tour. She addapted the tour at our requests. The charter arrived 1:10 hrs later than the agreed.

Dinner and Night Show at the Giza Pyramids

8 / 10 56 reviews
Enjoy a spectacle filled with light and sound at the Giza pyramids, one of the ancient wonders of the world. And you can complete your evening with a traditional Egyptian dinner!
US$ 41
Book
like

7.20 / 10 5 reviews
On this excursion we'll leave the immense Egyptian Capital behind, making our way to Ain Sokhna, a beach town found on the west coast of the Red Sea, near to the Suez Canal.
US$ 196.50
Book