Feel the history of Hurghada with this guided tour where you'll see monuments such as the Great Mosque, one of the most spectacular on the Egyptian coast.

Feel the history of Hurghada with this guided tour where you'll see monuments such as the Great Mosque, one of the most spectacular on the Egyptian coast. 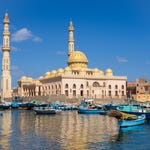 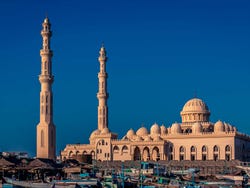 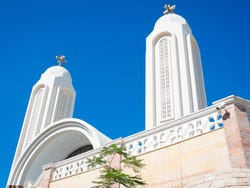 At the arranged time we'll pick you up at your hotel to begin the guided tour of the historic centre of Hurghada.

We'll see the minarets and white marble of the Grand Mosque, and inside visit the space laden with symbolism and beautiful decoration. The decoration of the dome is one of the most spectacular aspects of the mosque, but far from the only one. And we'll take a look at the prayer room and the mihrab, the sacred space which looks towards Mecca, and is decorated in an extraordinary range of colours.

Our route around the centre then takes us to the Coptic Church of Hurghada, where we'll learn about one of the largest Christian communities in the Middle East. The temple stands out, as well as for its architecture, for its artworks, which we will have the opportunity to study.

Our next stop will be the aquarium, where you'll be able to see the diversity of marine species which find their home in the Red Sea. Having seen the colour of these exotic fish you'll have free time to see the shopping streets in Hurghada

Then we'll head back to the bus to return to the hotels, finishing the guided tour after approximately four hours.

Tickets to the Great Mosque, the Coptic Church and the Hurghada aquarium.

6% discount on the official ticket price.

It was all perfect, the guide knows what he is talking about, he has taught me everything that was planned, also he took his time, time to help me with my Egypt phone card, the truth is I recommend the tour with eyes closed, he is a super educated guide , smart and makes you feel good at all times. Thanks Opinion translated. Show original.

Make the most of your time in Egypt discovering one of the most fun areas on the Red Sea on this boat trip to Orange Bay: enjoy snorkelling and other unforgettable water sports!

8 / 10 8 reviews
Be seduced by the exotic Red Sea, contemplating the coral reefs and the colourful fish of Giftun Island, one of the best snorkel spots in Egypt.
€ 30
Book