On this tour we'll pass through Granada's most historical, enchanting, and colourful neighbourhood by night. During the tour we'll hit the city's best tapas bars: discovering the tastes and scents of Andalusia. 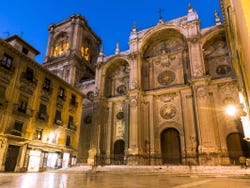 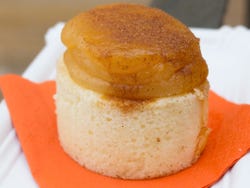 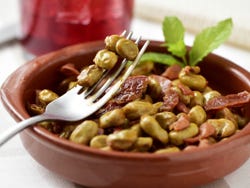 Your evening tour of Granada will begin at the Fuente de los Gigantes, or Fountain of the Giants, located in Plaza Bib-Rambla, a square in the heart of the city. You'll wander through nearby streets and squares, including Plaza del Carmen, Plaza de las Descalzas and Plaza de Isabel la Católica, reaching the Granada Cathedral and admiring its façade in the splendour of its nighttime illuminations.

Throughout your route, you'll learn about the history of Granada, the former capital of the Nasrid Kingdom, the last Muslim stronghold in the Iberian Peninsula before it was conquered by the Catholic Monarchs in 1492.

But Granada isn't just worth a visit for its legendary history, but also for its gastronomy. You'll have the opportunity to try it for yourself on the tour, visiting three different bars in the city. In each one, you'll enjoy a tasting of a tapas and a drink.

Granada's tapas isn't just known in Andalusia, but in all of Spain. Discover the fusion of Moorish-influenced cuisine and traditional Spanish recipes: a combination of flavours that are sure to captivate you.

Your tour of Granada at night and tapas tasting will come to an end in the city centre, not far from the original departure point. Don't forget to ask your guide for their recommendations for where to continue enjoying delicious local tapas!

English and Spanish speaking guide with expert knowledge of Granada's history and gastronomy.

9.60 / 10 33 reviews
Discover the incredible history and architecture of the impressive Alhambra, the Generalife and Nasrid Palaces thanks to your passionate and experienced guide.
US$ 59.20
Book
like Free

9.60 / 10 8,858 reviews
What better way to get to know Granada than on a free walking tour with a local guide?! On this tour you'll see the hisotric centre with a local expert.
Free!
Book
like -24%