See the famous Komodo Dragons up close with this two day tour of the Indonesian islands where these gigantic reptiles live. 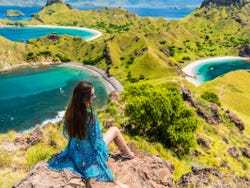 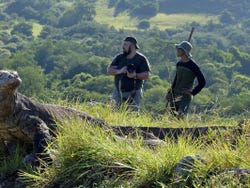 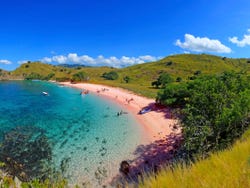 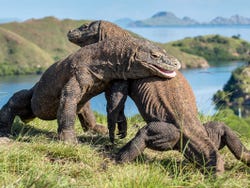 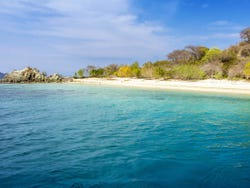 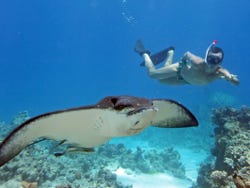 Having picked you up at your hotel or the Labuan Bajo airport, whichever you prefer, the tour makes its way to the Western part of the island to embark on a ferry to Bidadari island. Once you disembark, you'll have free time to snorkel in the crystal clear water.

Our tour then continues south to Rinca island, where we'll begin a hiking trail lasting approximately two hours. This is where you'll be able to see the famous Komodo Dragons of the islands. Their enormous size has given rise to any number of myths and legends throughout the ages, and you'll have the opportunity to confirm those stories for yourself! And as well as these legendary beasts, you'll have to keep your eyes open for any number of local species, such as the exotic birds and mammals which hide around every corner.

With our guided hike around Rinca complete, we head back on board, on the way to the island of Padar. Here we'll climb up its highest peak, to be delighted by the spectacular views of this dream island. We'll fuel up with dinner on board, then take up the route again, on our way to Kalong Island. Here we'll see the so-called 'flying foxes' (the largest species of bat in the world) indigenous to this part of Indonesia, which can weigh up to 1.6 kg.

The day then ends with dinner on the boat, where we'll spend the night.

Having eaten breakfast on board we'll disembark on Komodo Island, admiring once more the different kinds of reptiles which, thanks to their colossal size, have for centuries been known as 'dragons'. As well as getting up close and personal with the local wildlife, we'll visit Pink Beach another of the natural wonders of the island. We'll eat lunch on board the boat, then the cherry on the cake comes in the form of a tour around Komodo, snorkelling in its crystalline waters - where if you're lucky you may even see a manta ray!

Finally, we'll head back to Labuan Bajo. After disembarking at 4 pm, your guide will take you back to your hotel.

Having picked you up at your hotel or the Labuan Bajo airport, we make our way by road to the boat due to take you to Kelor Island. After free time to snorkel off the coast we'll climb back on board to sail to Rinca Island, where we'll take a two hour hiking trail, to see the famous Komodo Dragons - learning about their origins, habitat, and behaviour up close.

After lunch on board, we'll sail the clear waters of the Flores sea to Padar Island whose tropical landscapes are sure to captivate from the very first moment! Then we'll head to Kalong Island, to see the famous 'flying fox' bats who call the island their home. Then the day ends back at Labuan Bajo, with dinner and accommodation in a four-star hotel on its Western coast.

Full of energy we'll launch from the Labuan Bajo port to Bidadari Island, where you'll snorkel in the crystal clear waters off the coast, delighted by the wealth of wildlife. Then we head to the famous Komodo Island itself, which will be perhaps your best opportunity to see the legendary dragons in their natural habitat. Having eaten on board we'll then visit the famous Pink Beach, where, all being well, you'll be able to swim with Manta rays!

Then, with unforgettable memories of the Indonesian wildlife, we'll head back to the western port of Labuan Bajo for 4 pm, where a minibus will be waiting to take you back to your hotel or to the airport, whichever you prefer.

What do I need to do?

No matter which option you choose, to take this tour you should take an international flight to Komodo airport, also known as Labuan Bajo Airport  (LBJ). You can reserve your flight back from 6 pm the day after the tour commences. For example, if you take the activity on Monday morning, you can book your return flight on Tuesday evening.

The tours include pick up in the airport and in the hotels on Western Flores island. If you're staying in another part of the island, you should indicate so when making your reservation, to confirm that you will be able to be picked up.

Labuan Bajo island pick up and drop off at hotel or airport.

Full board accommodation either on a boat or in a hotel (depending on the option chosen).

You can book up to 2 days before (Labuan Bajo local time) if there are still places available.

10 / 10 1 review
Climb aboard a speedboat ready for a day of adventure exploring Komodo National Park. Swim, snorkel and immerse yourself in nature!
US$ 114
Book
like

No rating yet
Make the most of your time in Labuan Bajo to discover the underground treasures of Flores Island: Batu Cermin and Rangko Caves await you!
US$ 68
Book