This guided visit through Adolf Hitler's Munich means you get to know the role justice, propaganda, art, and religion played in the beginnings of Nazi Germany. 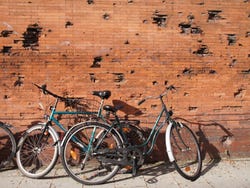 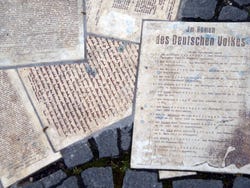 Called 'The Capital of the Movement' by Hitler himself, Munich still contains the footprints left behind by those fateful happenings which would change the lives of millions. During this tour we will pass through the stage on which this story played out, learning about all the key points in the story from the foundation of the Nazi party, to the attempted coup (the Beer Hall Putsch), Goebbels' book burning or the anti-Jewish pogrom Kristallnacht.

Beginning from Mary's Column in Marienplatz the tour takes in the Führerbau, where Neville Chamberlain and Adolf Hitler signed the Munich treaty in 1938, Königsplatz where the mass Nazi rallies were held, The former headquarters of the Gestapo secret police and Sterneckerbräu, meeting place of the early Nazi party.

With an expert guide, the sites of such historic events are brought to life, all in the context of Munich's emergence from almost complete destruction following the Allied bombings of World War II, and its attempts to come to terms with its dark past.

Some of the most important monuments and landmarks that this tour will take you to see are: Karlsplatz, Karlstor, Justizpalast (the Palace of Justice), the Ministry of Finance, Königsplatz, the Führer's building, Haus der Kunst (House of Art), the Feldherrnhalle monument to the Bavarian Army, Hofgarten, the Kriegerdenkmal World War I and II Memorial, Odeonsplatz, the University and squares dedicated to Professor Hubert and Sophie Scholl of the White Rose movement and the Altes Rathaus (Old Town Hall).

You can book up until the same day (12:30 PM local time) if there are still places available.

US$ 16.70
No hidden fees or surcharges
Free cancellation up to 6 hours before the service starts
Book

In front of Mary's Column in Marienplatz

We learned so much. Jake was a wealth of knowledge on Hitler’s early rise.

Australian guide was very good, knowledgeable and with a relaxed and interesting presentation style. Group size was ok and appreciated the toilet stop!

9.70 / 10 2,022 reviews
Although visiting a concentration camp would perhaps not be considered 'pleasurable', its historic importance is beyond doubt: an unmissable visit when in Munich.
US$ 31
Book
like

8.80 / 10 26 reviews
Discover the stories, fables and legends hidden behind the walls of the Mad King's Palace on this tour to Neuschwanstein Castle from Munich.
US$ 61
Book
like

9.40 / 10 214 reviews
Take a trip to the Neuschwanstein Castle in the Bavarian Alps and discover the legends hidden in the fortress which inspired Walt Disney's fairytale castles.
US$ 61
Book