Incredible wildlife, volcanic landscapes and paradise beaches... there's a reason the Galapagos are known as the Enchanted Islands. Discover their incomparable magic on this five-day island hopping adventure! 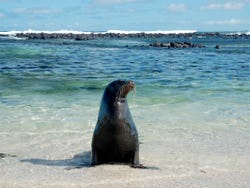 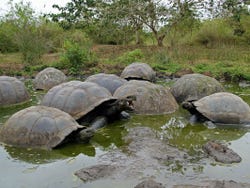 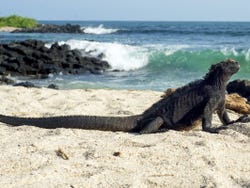 On arrival at the airport, you'll be picked up and taken to your hotel on Santa Cruz Island. From there, you'll begin your Galapagos Islands adventure visiting Los Gemelos, or "The Twins", two massive craters formed by a series of eruptions when the island's volcanoes were still active.

After admiring these two impressive sinkholes and the surrounding flora and fauna, you'll head to the Charles Darwin Research Station. Learn all about the centre's conservation programme for the Galapagos giant tortoise, and how they rescue and care for these incredible endangered creatures.

You'll then be returned to your hotel on Santa Cruz Island.

Following a hearty breakfast, you'll board a ferry in the direction of Isabela Island. Learn all about the biggest Galapagos island as you take in the views of its spectacular volcanic landscapes and the striking dark-coloured rocks contrasting with the turquoise waters lapping the shores.

Exploring the south of the island, you'll discover incomparably diverse wildlife thanks to the island's volcanic history. A wealth of bird, animal and sea life makes Isla Isabela an unforgettable experience: from rare sub-species of tortoise to flamingos, penguins and both land and marine iguanas, it is a true natural haven.

Your second night will be spent on Isla Isabela.

This morning, you'll head to Las Tintoreras, a group of tiny islets - some just mere rocks jutting out of the sea - located in a bay south of Isabela Island. Also known as Tintorera or Villamil, this area has an unbelievable biodiversity despite its small size. Spot sea lions and blue-footed boobies - birds with bright turquoise feet - basking on lava rocks.

You'll then return to Isabela Island and catch a ferry back to Santa Cruz Island, where you'll spend the night.

Day four will see you visiting the most important places on Isla Santa Cruz, including Punta Estrada. Enjoy the beautiful beach, swim with sea lions, and observe the majestic marine iguanas and the different types of birds who call this area home.

Around midday, you'll make your way to Tortuga Bay, one of the world's longest white sand beaches. Relax and enjoy its sparkling blue waters, home to incredible marine wildlife.

Return to your hotel in Santa Cruz to rest.

After enjoying breakfast in the hotel, you'll be taken back to the airport, putting an end to your unforgettable Galapagos Island-hopping adventure.

The price indicated per person is based on two people sharing a double room. If you'd prefer a triple or quadruple room, please contact us for a personalised quote and to book.

Airport and hotel pick up and drop off service.

You can book up to 7 days before (Santa Cruz Island local time) if there are still places available.

US$ 756
No hidden fees or surcharges
Book

Not refundable. This activity does not permit modifications nor cancelations.
like

10 / 10 1 review
Enormous marine iguanas, giant tortoises, paradise beaches and incredible ecosystems... Discover why the Galapagos are known as the Enchanted Islands.
US$ 169
Book
like

No rating yet
Meet giant tortoises, immerse yourself in nature and enjoy stunning beaches of Santa Cruz on this unforgettable four-day Galapagos Islands adventure.
US$ 535
Book
like

No rating yet
Enjoy mountain biking through Cerro Mesa Ecological Reserve and relaxing on the beautiful Garrapatero Beach on this unmissable tour of Santa Cruz Island.
US$ 219
Book