This tour offers a full experience of Tunisia, you'll traverse the expansive landscape, the medina, the archaeological sites and film sets. Discover the country's best locations in 7 days! 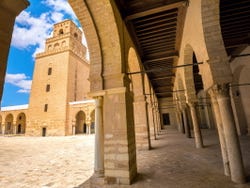 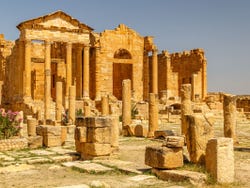 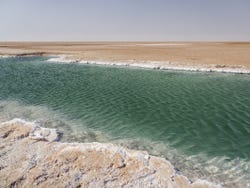 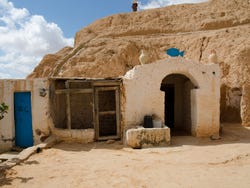 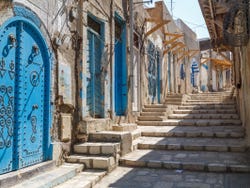 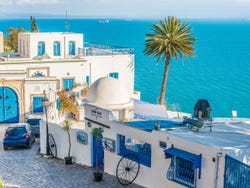 We'll pick you up from your hotel at 7:30 am and go to the Bardo National Museum, one of the most important museums in the Mediterranean which is home to one of the largest Roman mosaic collections in the world. Afterwards, we'll wander through the narrow streets of Tunis' Medina Quarter, and pass by the traditional crafts amongst the Arab market.

The next stop will be the Al-Zaytuna Mosque, the city's most beautiful and symbolic temple. Then we'll go to a local restaurant to enjoy a traditional meal.

Finally, the day will end leaving Tunis to head to Kairouan, stopping along the way to take photos of the impressive landscape.

We'll start the day off with breakfast ready for the day ahead and the guided tour of Kairouan including the Great Mosque, the Barbero mosque and the curious streets of the sacred city.

Then, the tour will head to Sbeitla where the first stop will be a traditional Tunisian meal at a local restaurant.

Following on we'll visit the Sbeitla ruins, belonging to the important Roman city later converted into the Byzantine capital. The guide will explain the history of the archaeological remains and the settlement around the area.

We'll then go to Tozeur and stay the night.

The day will start off with breakfast at the hotel, before heading out to explore the arid landscape of the west Tunisian coast. First, we'll make our way to Métlaoui in northern Tozeur and board the iconic Lezard Rouge train used by the monarchs at the end of the 19th century.

During the two hour journey, we'll admire the remarkable views of the Selja Gorges and pass through popular villages such as Tamerza, Chebika and Midès. Then we'll go back to the train's departure point where a delicious meal at a local restaurant will be waiting for us.

We'll go back to the bus which will take us to the Ong Jemel hill. This area is famous for appearing in many films including The English Patient and Star Wars.

After lunch, we'll make our way to Douz. There will be a stop to explore Chott el Djerid, a large salt lake which, depending on the season, turns different colours including white, green and purple.

Once we get to Douz, the gateway to the Sahara, we'll have a delicious lunch at a local restaurant and visit Tamezret. This village made up of small, narrow streets sits at the top of a mountain, with a mosque at its highest point.

Then we'll visit Matmata and its cave style houses. These troglodyte dwellings are homes excavated into mountains to shelter inhabitants from the harsh weather conditions, they are also famous for having been used in the Star Wars films in 1976.

After having breakfast at the hotel, we'll make our way to Sfax for a guided tour around the second most important city in Tunisia. We'll visit its medina, the main square and the neo-mudéjar buildings inspired by the Moorish Revival culture.

We'll have lunch at a restaurant in Sfax, then go to El Djem. Here you'll explore the Archaeology Museum and one of the most important monuments in Tunisia, El Djem's amphitheatre, the third most important in the world.

The tour will continue towards Susa, where we'll go to its Medina, a UNESCO World Heritage Site, and the Arab markets.

The day will begin by having breakfast and heading to the Carthage's archaeological site, located on the Mediterranean coast. We'll learn about how the Phoenician colony became the Carthaginian Imperial capital, as well as the important history of the Punic Wars between the Carthaginians and the Romans.

We'll then have lunch at a local restaurant before going to the next stop, Sidi Bou Said. You'll be charmed by the white walls and blue doors and windows of the maze style streets around the traditional Mediterranean city.

Finally, we'll go to the local city of Gammarth and spend the night.

On the last day, we'll enjoy breakfast at the hotel before going to visit the Dougga ruins and discover the Rose of the Winds Square, the Capitoline Temple, the forum and the springs.

Then we'll stop for our final lunch on this trip at a local restaurant, and continue on to Bulla Reggia, one of the most important  Roman archaeological sites in Tunisia.

At 5:30 pm we'll arrive in Tunis and here the tour will finish.

For this trip, you'll need return flights to Tunis, and one night stay for the day prior to the one booked. You'll have to arrive the day before the tour starts and return on the same day the following week, i.e. if you arrive on a Monday, you'll return the following Monday.

The price includes accommodation, half board, restaurant meals, car, driver, guide, and tickets for all of the activities and visits. You'll just need cash for souvenirs and drinks.

The price indicated is to stay at 3, 4 and 5 star hotels.

6 nights half board accommodation (breakfast and dinner).

All entries to activities.

US$ 1,046.20
No hidden fees or surcharges
Free cancellation up to 7 days before
Book

9.80 / 10 16 reviews
Explore northeast Tunisia and immerse yourself in its past at the Bardo Museum and the Archaeological Sites of Carthage.
US$ 206 per group
Book
like

10 / 10 8 reviews
Immerse yourself in the historic and cultural legacy of the Roman Empire in Tunisia and explore ancient monuments on this guided tour Dougga and Bulla Regia.
US$ 106.20
Book
like

8 / 10 3 reviews
Did you know that Tunisia is home to one of the largest Roman amphitheatres in the world? Discover it on this guided tour of historic Monastir and El Jem.
US$ 110.50
Book