Immerse yourself in the history of Denmark on this guided tour of Christiansborg, an important royal palace and government building on the isle of Slotsholmen. Plus enjoy spectacular views from the tallest tower in Copenhagen. 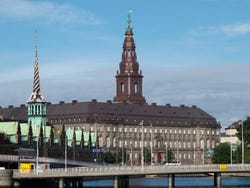 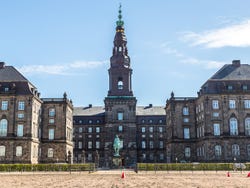 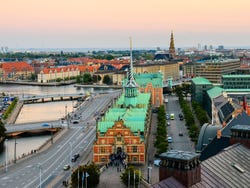 Meet your guide at the main entrance to the Christiansborg Palace. The historic building is located on Slotsholmen, or "Castle Island", an islet in Copenhagen's harbour.

Before you enter the building itself, your expert English-speaking guide will explain the current use of Christiansborg, as the seat of the Folketing, as the Danish Parliament is known. After learning interest facts about the unicameral political system of the Scandinavian country, you'll embark on a guided tour of the palace's royal chambers, admiring the lavish Baroque and Neo-Baroque interior decoration.

Discover the extensive collection of Gobelin tapestries in the Great Hall of Christiansborg, one of the palace's most spectacular rooms. These magnificent works portray different events from Denmark's history in incredible detail.

After approximately an hour and a half, your guided tour of the palace will come to an end back at the original start point.

At the end of your tour, you'll have the opportunity to climb up to the Christiansborg Observation Deck, which is the tallest tower in Copenhagen and offers incomparable panoramic views over the Danish capital. The tower is open from 11 am until 9 pm, and access is free!

This guided tour does not include entrance to Christiansborg Palace. The ticket for the palace costs 60 DKK per person (9 EUR approximately), and children under 17 years old enter for free.

If you have the Copenhagen Card, your entrance fee to Christiansborg Palace is included.

Your guided tour of Christiansborg Palace only enters the royal chambers; the Parliament Wing and all other administration offices are not open to the public.

If you'd prefer, you can reserve a private guided tour of Christiansborg Palace instead, with an exclusive guide just for you and your group.

You can book up to 3 days before (Copenhagen local time) if there are still places available.

US$ 32.40
No hidden fees or surcharges
Free cancellation up to 4 days before
Book

Free! Free cancellation up to 4 days before the day of the activity. If you cancel under this time or do not show up, you will not be refunded.
When the minimum number of participants (4) is not reached, we will contact you to offer you other alternatives.

9.50 / 10 4,313 reviews
Enjoy a guided tour of the historic centre of Copenhagen, the best way to get to know the Danish capital for a first timer, and what's more, it's free!
Free!
Book
like Skip the line

9.50 / 10 114 reviews
The Copenhagen Card helps you save time and money in the Danish capital, and includes free entry to 79 attractions, as well as unlimited use of public transport
US$ 57.80
Book
like New

8 / 10 13 reviews
Discover Kronborg, Hamlet's castle in Helsingør, and visit the Swedish cities of Lund and Malmö on this day trip from Copenhagen.
US$ 108.70
Book