This KL Tower ticket allows you to climb to the top of the highest viewpoint in Kuala Lumpur to admire the city from the best spot in the city. Unmissable! 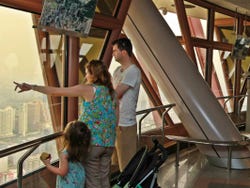 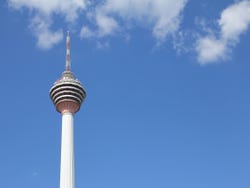 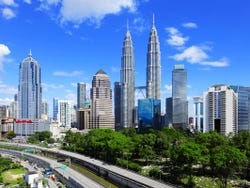 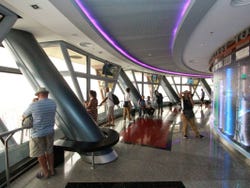 The KL (Kuala Lumpur) communication tower, also known as the Menara Tower, is one of the skyscrapers symbolising the Malaysian capital. At 421 metres up, this communications tower plays host to a revolving restaurant, theatres, a Formula 1 simulator and even a miniature zoo! And from the outside, you're sure to be impressed by its elegance and the feat of engineering which it represents: the seventh-tallest freestanding tower in the world.

These tickets give you the opportunity to head up to the observatory found in the 'head of the tower'. From here you'll get a three hundred and sixty degree view of Kuala Lumpur, seeing every detail of the city through special cameras set up around the viewing platform. And what's more, from the Menara Tower observatory you'll be able to take some spectacular photos with the equally famous Petronas Towers.

The KL Tower observatory is open every day between 9 am and 10 pm.

About the KL Tower

Construction on the tower began in 1991, and came in three phases, with the foundations taking up an incredible 50,000 cubic metres of concrete! It was completed in 1994, when the antenna mast was installed to take the tower to its full height of 421 metres.

Although a communications tower, its form is not merely functional. The main lobby in the upper ground floor is decorated in the muqarnas style: a kind of intricate vaulted ceiling influenced by Persian architecture, and sometimes known as 'honeycomb vaulting'. With this distinctive design crafted from glass, the roof seems to glitter like diamonds. The building does throughout, in fact, represent the nation's Islamic heritage, dotted with Arabic script, and Islamic tiles featuring traditional floral motifs.

From that seeming tranquillity to sweat, adrenaline and pounding hearts: the KL Tower is also home to the World Basejump Centre. This activity, which involves parachuting from static objects such as towers, mountains and bridges, has taken place yearly from the KL since 1999, and is now the largest such event in the world! Or if you'd rather go up than down, every year there's the KL Tower International Towerthon Challenge - in which contestants look to scale the 2058 steps which make up the 421 metre climb in the quickest time possible.

So much more than a mere communications tower, the KL is a representation of modern Malaysia, a landmark to define the city, and a symbol of a vibrant, multicultural nation.

Entry to the Kuala Lumpur Tower

These are genuine reviews written by our customers.
8
8 8 reviews

It worked perfect and without queuing. The voucher should be delivered immediately upon payment. Even more so because they demand it in print and sometimes by word of mouth it is not easy to print. Otherwise they should accept QR code. Opinion translated. Show original.

7.80 / 10 32 reviews
Just 40 minutes from Kuala Lumpur, this Batu Caves day trip takes in some of the most famous sanctuaries in Malaysia in one unmissable excursion.
US$ 14.30
Book
like

9.50 / 10 28 reviews
Take this fantastic trip to the Kuala Gandah Elephant sanctuary to meet these amazing creatures.You will also visit the magical Batu Caves.
US$ 60
Book