With numerous government buildings and other beautiful monuments on the banks of a picturesque lake, Putrajaya is one of Malaysia's most fascinating cities.

With numerous government buildings and other beautiful monuments on the banks of a picturesque lake, Putrajaya is one of Malaysia's most fascinating cities. 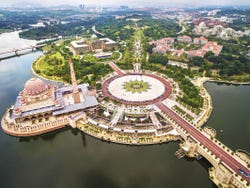 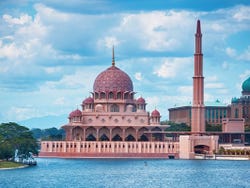 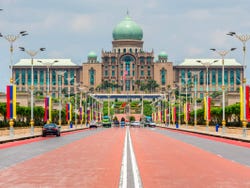 After being picked up from your hotel in Kuala Lumpur, you'll set off on your route to Putrajaya, located just 35 minutes from the Malaysian capital. The planned city was established in the mid-1990s as the new seat of government, due to overcrowding in the capital itself, and it is now home to most of the country's governmental ministries.

The beautiful Lake Putrajaya, where you'll make your first stop, is located in the heart of the city. On the banks of this expansive body of water, you'll find the majestic Putra Mosque. Admire the distinct Islamic artwork of its exterior, whose geometrical shapes will leave you mesmerised. The enormous temple, constructed from rose-tinted granite and topped with a large pink dome, can house up to 15,000 people, and its minaret, at 380 feet (116 m) in height, is one of the tallest in the world.

Next to the mosque, you'll see Perdana Putra: the Malaysian Prime Minister's office complex. Discover how its colossal turquoise cupolas were built as you take in the sight of its magnificent façade.

Finally, you'll finish your half-day tour of Putrajaya and head back to Kuala Lumpur via the Putra Bridge, one of Malaysia's most spectacular feats of engineering. The structure boasts three levels for vehicle, monorail and pedestrian access, and also houses fine-dining restaurants within its pillars.

This tour includes collection from hotels in the centre of Kuala Lumpur. If your hotel is not in the centre, you can choose between making your own way to a meeting point in the city centre, or being picked up from your hotel for an additional cost of 80 RM (19 USD) per car.

Very good and very kind driver. We were enjoy so much with this tour Thank you so much

7.80 / 10 32 reviews
Just 40 minutes from Kuala Lumpur, this Batu Caves day trip takes in some of the most famous sanctuaries in Malaysia in one unmissable excursion.
US$ 14.40
Book
like

4.50 / 10 4 reviews
Discover Kuala Lumpur in the comfort of a tourist bus. Visit the Malaysian capital's iconic landmarks and hop on and hop off at any of its stops along the way!
US$ 13.20
Book