The former Portuguese colony of Malacca, also spelt Melaka, is home to a long and fascinating history. Discover the legacy of this UNESCO World Heritage Site on this full-day trip from Kuala Lumpur.

The former Portuguese colony of Malacca, also spelt Melaka, is home to a long and fascinating history. Discover the legacy of this UNESCO World Heritage Site on this full-day trip from Kuala Lumpur. 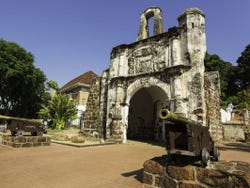 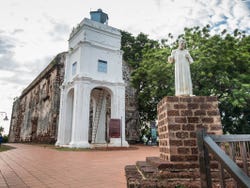 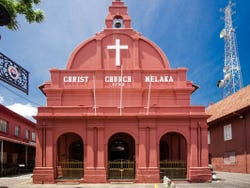 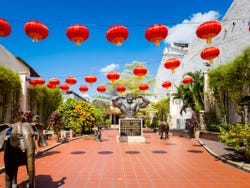 After being picked up from your hotel in Kuala Lumpur first thing in the morning, you'll be driven to Malacca, one of Malaysia's most historic cities.

Following an approximately two hour journey, you'll arrive in the heart of Malacca, where you'll head on a guided tour of the ancient town. As you explore the former colonial city, discover the legacy of its European colonists as you visit sites such as the Porta de Santiago, a stone gatehouse which is the only remaining part of the ruined 16th-century Portuguese fortress known as A Famosa.

Not far from these architectural remains, you'll reach the ruins of St Paul's Church, once home to the body of St Francis Xavier, a 16th century Spanish Roman Catholic missionary who worked in Malacca, and whose statue still stands outside the crumbling building to this day. Learn all about the saint's journeys across the world thanks to your expert guide.

Continue next to a neighbourhood of Malacca famed for its red buildings built by the Dutch colonialists who succeeded the Portuguese. Amongst the different crimson-coloured architectural delights, the Christ Church particularly stands out. Located in one of the city's prettiest squares, the 18th century Protestant church is still active to this day. The perfect place to discover more about Malacca's passionate history!

Having explored the best of this legendary city, take a well-deserved break at a local restaurant, where you'll enjoy a traditional Malaysian lunch. With recharged batteries, you'll then make your way to Jonker Street, the heart of the city's shopping district. From here, you'll set off back to Kuala Lumpur.

This tour includes collection from hotels in the centre of Kuala Lumpur. If your hotel is not in the centre, you can choose between making your own way to a meeting point in the city centre, or being picked up from your hotel for an additional cost of 80 RM (19 USD) per car.

Lunch in a local restaurant.

US$ 62.50
Free cancellation up to 48 hours before the service starts
Book

7.80 / 10 32 reviews
Just 40 minutes from Kuala Lumpur, this Batu Caves day trip takes in some of the most famous sanctuaries in Malaysia in one unmissable excursion.
US$ 14.20
Book
like

9.30 / 10 8 reviews
With numerous government buildings and other beautiful monuments on the banks of a picturesque lake, Putrajaya is one of Malaysia's most fascinating cities.
US$ 36
Book