Pere Lachaise Cemetary is the resting place for many notable figures from the past, such as Oscar Wilde and Edith Piaf. Discover the world's most famous graveyard when you take our fantastic tour.

Pere Lachaise Cemetary is the resting place for many notable figures from the past, such as Oscar Wilde and Edith Piaf. Discover the world's most famous graveyard when you take our fantastic tour. 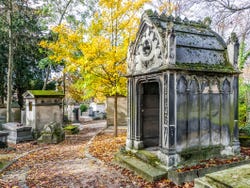 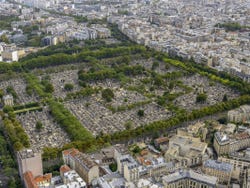 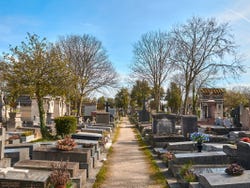 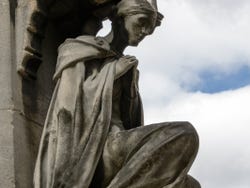 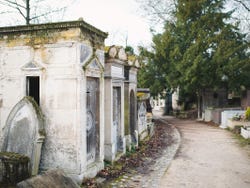 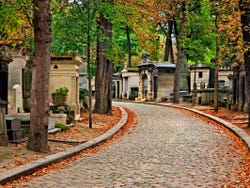 We will meet next to the Philippe Auguste metro station, close to the Père Lachaise cemetery. From there it's just a few meters to the entrance of one of the most famous cemeteries in the world.

Once inside, we'll begin our two-hour guided tour during which you will delve into the history surrounding the captivating graveyard and discover the tombs of famous people such as singer Edith Piaf, actor Yves Montand, and composer Chopin. Did you know that this idyllic corner of the city is the largest green space in the French capital?

During the tour of the Père Lachaise cemetery, we will visit the tomb of Jim Morrison, lead singer of the rock band The Doors, and the tomb of the Irish writer Oscar Wilde, whose grave is completely covered with the marks of kisses.

Along the route, you will hear all the fascinating legends and mysteries surrounding one of the most enigmatic locations in Paris. Rumours abound that some restless souls have been seen creeping through the neighbourhood streets in the dead of night.

The tour will come to an end at the Père Lachaise cemetery.

The tour may be given in multiple languages when the size of the group is small.

Entry to the Père Lachaise cemetery.

You can book up until 1.5 hours before the activity as long as there are still places. Book now to guarantee your spot.

US$ 20.30
Free cancellation up to 24 hours before the service starts
Book

Lulu was a wonderful guide, I really enjoyed the tour and our chats. She very clearly cared about history and was very knowledgeable.

It was amazing! The guide Ludivine is a friendly person, filled with interesting information about cemetery we visited and she really loves what she does. We would recommend her to everyone who wants to explore Pere Lachaise

Thank you Marine Your passion for history and the cemetery has fascinated us. Despite the cold, the weather seemed short to us. Glad to have met you. Thank you thank you Marine Opinion translated. Show original.

In a mini-group made up of French and Spaniards who did not know each other, an original walk (in a cemetery anyway) and a very nice visit of 2 hours, full of interesting, historical, sometimes funny anecdotes, thanks to our young guide, Ludivine, cultivated and pleasant, who switched simultaneously from one language to another to explain everything. Thanks to her :) Opinion translated. Show original.

9.10 / 10 398 reviews
Immerse yourself in "The City of Lights" with a guided tour around the French Capital, discovering the Louvre, the Siene and Notre Dame. What's more, it's FREE!
Free!
Book
like

9 / 10 80 reviews
Take a free tour through the narrow streets of the most cultural and artistic of Paris' districts, where Picasso and Van Gogh sought out inspiration.
Free!
Book
like

8.70 / 10 1,685 reviews
Drifting down the Seine River on a panoramic river boat during the day or at night-time is an unforgettable experience and offers unparalleled views of Paris.
US$ 16.90
Book