Check out all the activities in Siem Reap

Lose yourself in the magic of Cambodia on a bike tour. Choose between two different routes: explore the rice paddies and farms of rural Siem Reap or discover the mystical jungle around the Angkor Temples. 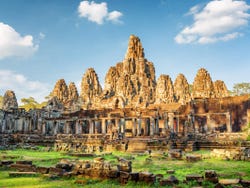 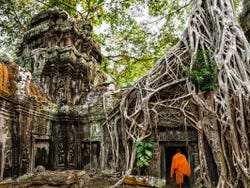 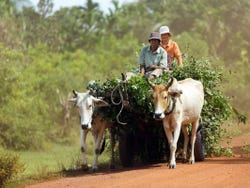 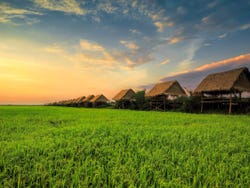 After being picked up from your hotel at 7:30 am, you'll be given all the equipment you need for your bike tour of rural Siem Reap. Leave the hustle and bustle of urban Siem Reap behind and embrace the tropical countryside. Pass by farms and villages as you pedal across the luscious green landscapes of Cambodia's rice paddies, and learn all about the local traditions and culture as you experience daily life in the rural settlements on your route.

Don't worry if you're not an expert cyclist - this bike tour of rural Siem Reap is suitable for all levels, and your professional English-speaking guide will adapt the speed and route to your preferences and abilities. You'll also take a break during your tour, giving you the opportunity to taste delicious typical snacks and fruits (included).

This tour will finish around 12:30 pm, and you'll be returned to your accommodation.

You'll be picked up from your hotel at 8 am, and after being kitted out with everything you need for your tour, you'll begin cycling in the direction of Angkor, the former capital of the Khmer Empire. The ancient megacity is located amid luscious jungle, and over the more than 500 years since the site was abandoned, the trees and plants have started to take over the temple ruins.

The first stop on your route will be Ta Prohm. The exquisitely carved stone walls of this designated World Heritage Site are just about visible between the overgrown roots and branches of the surrounding forest. You'll soon see why this mythical temple was chosen as a scene for the filming of Tomb Raider - it makes for a breath-taking image of the union of man and nature!

Your route will then continue towards the lost city of Angkor Thom, which you'll enter via an ancient stone gate, watched over by an intricate elephant carving and four giant faces. From here, you'll head to Prasat Bayon, one of Angkor's most iconic temples. Bayon is known for its famous "face towers", around 50 towers each featuring up to four carved faces, said to represent the provinces of the Great Khmer Empire.

Visit the Terrace of Elephants, the over 1000-foot long (350 m) viewing platform, and the Terrace of the Leper King, both known for their detailed bas-reliefs. An unforgettable experience!

You'll also take a break at a local restaurant, where you'll enjoy a lunch of tasty traditional Cambodian dishes (included). With full stomachs and happy taste buds, you'll begin your route back to Siem Reap, where you'll be dropped off at your hotel for about 4 pm.

Lunch (only on Angkor route).

Check out all the activities in Siem Reap

8 / 10 1 review
Let yourself be captivated by the rhythms of Apsara: enjoy a performance of the traditional Cambodian dance and indulge in a typical buffet dinner.
US$ 28
Book
like

No rating yet
Discover the flavours of Cambodia on this food tour of Siem Reap. Delight your senses with the tastes, sights and smells of the night market.
US$ 45
Book
like

9.20 / 10 12 reviews
Delve deep into the hidden secrets of Angkor on this three day tour of its temples: the best way to discover the world's biggest religious site!
US$ 323.70 per group
Book