Discover the top sights around the stunning Medieval city of Girona on an exclusive private tour just for you and your companions. An English speaking guide will take you to the Jewish Quarter, the ancient walls, the Cathedral, and much much more.

Discover the top sights around the stunning Medieval city of Girona on an exclusive private tour just for you and your companions. An English speaking guide will take you to the Jewish Quarter, the ancient walls, the Cathedral, and much much more. 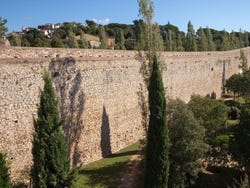 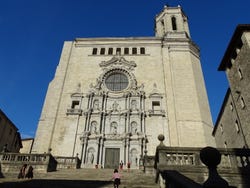 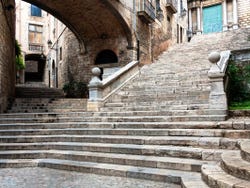 By booking this private tour, you will have an English speaking guide exclusively at the service of you and your group. Choose the time and day that's best for you to go on your tour, and what's more, if you're a larger group, you'll also save money.

Meet your guide in Plaça de Sant Feliu square to begin your private tour around the historic city centre of Girona. For approximately three hours you'll explore the streets of what is known as the "City of the Four Rivers" while your guide reveals the fascinating history and secrets of this location.

Walking along the Via Augusta, the old Roman road which connected the historic Mediterranean territory of Hispania (the Iberian Peninsula) with what is now Italy, you'll arrive at the former defensive city walls. These ancient remains are a testimony to the Roman, Visigoth, Carolingian and Medieval eras which have shaped the history of Girona.

Your private guided tour will then continue to the Jewish Quarter, a labyrinth of narrow streets in which this community's heritage has been well preserved. This neighbourhood, commonly known as the 'Call', was home to one of the most important Jewish communities in Spain which at one point constituted a tenth of Girona's total population. As you explore its picturesque streets, which were home to the Medieval Kabbalistic philosopher and Sephardic Rabbi Nachmanides, you will hear all about the Jewish way of life in the Middle Ages.

From the Jewish Quarter, you'll stroll along the delightful Carrer de la Força and the beautiful boulevard known as La Rambla. Wander along the banks of the Onyar River and enjoy the view of the famous colourful houses and iconic bridges of Girona: the Pont de Pedra, Pont de les Peixateries Velles (designed by Gustave Eiffel) and Puente de la Princesa.

Your private tour will come to an end by the Onyar River.

Exclusive private tour just for you and your companions

Per group from
US$ 152.30
Free cancellation up to 6 hours before the service starts
Book

9.50 / 10 433 reviews
Immerse yourself in the world of Game of Thrones on this free guided tour of its filming locations in Girona.
Free!
Book
like

No rating yet
Travel through more than 500 years of cinematographic history with our Girona Cinema Museum Ticket. You'll have lots of fun viewing the cinematic objects and visual spectacles.
US$ 6.80
Book
like

Dali Tour of Figueres and Cadaques

10 / 10 15 reviews
Follow the footsteps of the celebrated artist Salvador Dalí on this tour that takes you to his birthplace Figueres and to two places from his life.
US$ 141
Book