Learn about the Cuban Revolution with this tour of Havana and find out about the movement that led Fidel Castro to power. 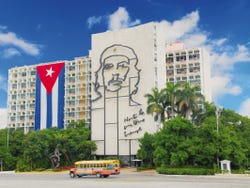 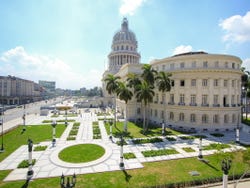 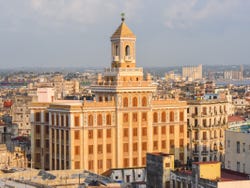 We'll meet at 10 am by the José Martí statue in the Central Park to start this tour of the Cuban Revolution. From there we'll walk down to the Bacardi building, the old headquarters of the famous brand of rum, and we'll tell you what happened to this stunning art deco building after 1959.

Then we'll walk past a grocery store and find out about the country's food rationing. We'll also find out about the relationship between the Cuban government and the Catholic Church in what is known as Operation Peter Pan, which transported over 14,000 children from Cuba to the United States.

Then we'll go to the Museum of the Revolution, where we'll see the Granma Yacht that Fidel Castro arrived in from Mexico and used in the Bay of Pigs invasion. When we leave the museum, we'll walk down to the Spanish Embassy and arrive at a primary school, where we'll learn about education on this Caribbean island since the Cuban Revolution.

The next stop will be the National Capitol Building. After admiring this landmark's impressive architecture, we'll catch a bus to the Plaza de la Revolución square. During the 20 minute journey we'll tell you all about the interesting history of this popular means of transport.

In Plaza de la Revolución we'll see its iconic building with the image of Che Guevara; one of the most prominent figures of the revolution. We'll finish the tour here at 1pm.

Museum of the Revolution

This tour doesn't include tickets to the Museum of the Revolution, which cost 10 Cuban pesos per person (around 10 dollars).

Tickets to the Museum of the Revolution (10 Cuban pesos, around 10 dollars).

If there are still places available, you can book until the previous day (Havana local time).

US$ 47.20
No hidden fees or surcharges
Free cancellation up to 48 hours before the service starts
Book

The best than Tour that I have hired in civitatis because his guide Karen explained everything to us in detail he was friendly and the tour was very enjoyable. If you go to Cuba to hire him and ask him to attend you, this guide Opinion translated. Show original.

We had a good day accompanied by Karen who explained everything to us wonderfully! A 10 for her. Thanks Karen. Opinion translated. Show original.

New
Capture your memories of the charming Cuban capital with this Havana Photo Tour. You'll wander past the city's beautiful monuments and representative scenes.
US$ 64.90
Book
like

9.90 / 10 33 reviews
Viñales Valley is one of the most spectacular natural regions in Cuba. Discover its beauty and traditions on a classic car tour from Havana!
US$ 165 per group
Book
like Free

9.40 / 10 301 reviews
Delve into the history of the Cuban capital on this free walking tour of Havana. Discover the city's beautiful colonial architecture with an expert guide.
Free!
Book