The Dalai Lama's palace, sacred temples and Buddhist monasteries: immerse yourself in the magic of the Tibetan capital on this four-day tour of Lhasa. 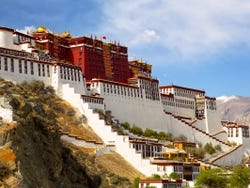 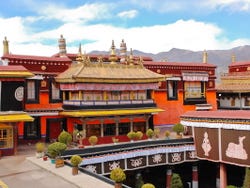 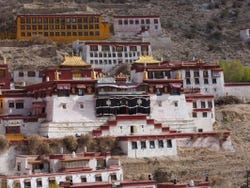 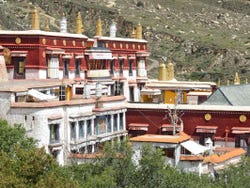 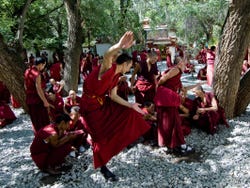 After being picked up from Lhasa Airport or train station on the first day of your tour, you'll be transferred to your hotel to get some rest before exploring the sights of Lhasa, the capital and largest city of the Tibet Autonomous Region.

Begin your day bright and early with a visit to the Potala Palace. After climbing its almost 400 steps, you'll reach the UNESCO World Heritage Site, which was the residence of the Dalai Lama until 1959. The magnificent palace is made up of more than one thousand rooms, including different chapels, sanctuaries, libraries containing ancient Buddhist scrolls and various stupas and murals.

Continue your guided tour of Lhasa to the Jokhang Temple, one of Tibet's most important spiritual centres. Inside, you'll have the opportunity to see a statue of Buddha at 12 years old amongst other fascinating Buddhist artefacts. Outside Jokhang, explore the famous Barkhor district, a lively area filled with pilgrims and locals alike.

For the finishing touch on your day, you'll be treated to a welcome meal in a typical local restaurant, completing your day full of Tibetan culture.

Having spent the previous day exploring the heart of Lhasa, today will see you leaving the city centre behind and delving into the Tibetan countryside. Not far away, you'll find yourself at the Drepung Monastery, the largest of Tibet's "great three" university monasteries. Exploring this sprawling Buddhist complex, you'll learn all about its history, which dates back to the early 15th century.

You'll then visit the Sera Monastery, where you'll have the unique opportunity to attend a Buddhist monks' debate. This fascinating ritual is incredibly important in Buddhism, and you'll be surprised by the lively clapping that forms a part of the practice!

On the final day of your tour, you'll be transferred back to Lhasa Airport or train station.

This tour includes three nights' accommodation in a three-star hotel in Lhasa with breakfasts.

The price indicated is per person either sharing a double room, or in their own room. If you are travelling alone, you may select the double room option and we will allocate you to share with another person on the tour.

Pick up and drop off at Lhasa Airport or Train Station (selected times).

Pick up and drop off at hotels.

Entrance to all monuments visited.

Pick up outside of indicated times.

You can book up to 42 days before (Lhasa local time) if there are still places available.

Free! Free cancellation up to 21 days before the day of the activity. If you cancel under this time or do not show up, you will not be refunded.
like

No rating yet
Discover the best of Tibet on this incredible 8-day tour. Explore Buddhist monasteries, admire spectacular Himalayan landscapes and hike to Everest Base Camp!
US$ 940
Book
like

No rating yet
Discover Tibet's breathtaking natural beauty exploring Yamdrok and Namtso, two of the region's largest sacred lakes, on this two-day tour from Lhasa.
US$ 1,377 per group
Book
like

No rating yet
Sacred lakes, Buddhist monasteries and Everest Base Camp: experience the trip of a lifetime travelling from Lhasa to the border with Nepal on this 7-day tour.
US$ 1,060
Book