Discover the breathtaking fusion between nature and architecture on this day trip to Ronda and Setenil de las Bodegas, two of Andalusia's most spectacular white towns. 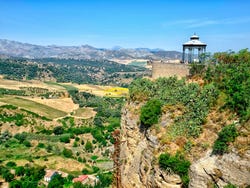 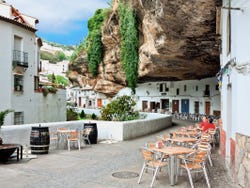 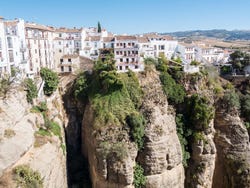 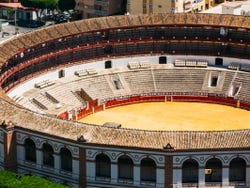 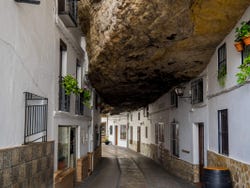 On the morning of your tour, you'll be picked up from the meeting point in the centre of Marbella and taken in the direction of Setenil de las Bodegas, one of the most picturesque of Andalusia's famous whitewashed towns. During the journey, you'll be able to admire the stunning countryside of Malaga province.

Having reached Setenil, after around an hour and a half's drive, you'll have free time to explore the magical town at your own pace. The houses and buildings of Setenil's historic centre have been built into the dramatic rocky overhangs of the gorge around which the town is located, making it a unique and fascinating setting.

You'll then leave Setenil de las Bodegas behind for the next stop on your tour: Ronda. Get the lay of the land first enjoying a panoramic visit of the historic town: you'll see the Gateway of Almocabar, the Church of the Holy Spirit, the Plaza del Ayuntamiento or Town Hall Square, and the Church of Santa María la Mayor, giving you a feel for Ronda's extensive history.

Continue your excursion to the Maestranza Plaza de Toros, one of the oldest bull rings in Spain, and the birthplace of traditional bullfighting. It's also famous as the home of the Corrida Goyesca, an annual bullfighting festival where the locals dress up in incredible outfits reminiscent of the era of famous Spanish painter Francisco de Goya. Inside, you'll also get to visit the Bullfighting Museum.

Next, you'll visit Bodegas La Sangre, one of Ronda's traditional wineries, where you'll have the opportunity to indulge in a tasting of local wines - cheers!

At the end of the day, after you've had free time to explore and eat in Ronda, you'll be returned to the centre of Marbella.

This tour may make a number of stops along the Costa del Sol to pick other people up on the route.

US$ 47.40
No hidden fees or surcharges
Free cancellation up to 48 hours before the service starts
Book

Didn't have enough time in setemil, half hour way too short. Guide wasn't informative with regards to toilets etc.Driver good and the tour was good value.

8 / 10 2 reviews
Discover the mixture of cultures hidden within the marvellous city of Cordoba. The perfect opportunity to spend a day following in the footsteps of the caliphs.
US$ 77.70
Book
like

No rating yet
If you're visiting Andalucia, one of the unmissable sights is its capital: Seville. Be amazed by the charm of one of Spain's most beautiful cities!
US$ 77.70
Book
like

7.30 / 10 9 reviews
Cross the Gibraltar Straight with us and spend a day in Tangier: a special day trip, filled with the essence of Moroccan life.
US$ 116.50
Book