If you're visiting Andalucia, one of the unmissable sights is its capital: Seville. On this day trip, you'll be amazed by the charm of one of Spain's most beautiful cities! 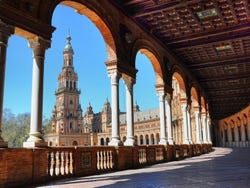 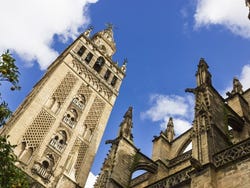 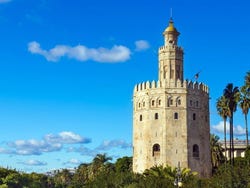 We'll pick you up first thing in the morning, and head to Sevilla, where the first thing we'll do is take a guided tour of its historic centre. We'll explore Paseo de Colón, la Plaza de América, la Avenida de las Palmeras, the María Luisa park and the Guadalquivir river which divides the city in two: Sevilla and the Triana neighbourhood.

Then we'll get off the bus in the famous Plaza de España, where you can take photos in the different benches, beautifully ornamented with decorative tiles, which have made the square famous.

Next we'll make our way to the Walled Gardens, (Jardines de Murillo) and the Santa Cruz neighbourhood, one of the most beautiful areas of Seville. This is the old Jewish neighbourhood, which was once home to the second most important Jewish community in Spain during the reign of Fernando III.

Our route then continues, to the Seville Cathedral, the third largest in the world after St Peter's in Rome and St. Paul's in London. This majestic cathedral was constructed in the 15th century, on the foundations of a mosque from the late 12th century.

After the guided tour of the cathedral, you'll have free time to eat, and to finish exploring the beautiful Andalusian capital. Then we'll meet again in at the Torre del Oro (Golden Tower) on the banks of the Guadalquivir - the cherry on the cake of a spectacular day.

This tour may make stops along the Costa del Sol to pick up other tour participants en route.

Transfer in an air conditioned bus.

Entry to the Seville Cathedral.

Panoramic tour and guided walking tour of the city.

You can book up until the previous day (12:00 pm) if there are still places available. Book now to guarantee your spot.

US$ 85.40
Free cancellation up to 24 hours before the service starts
Book

Free! Free cancellation up to 24 hours before the activity starts. If you cancel under this time or do not show up, you will not be refunded.
like New

New
Explore the rugged mountains of Marbella and Estepona on this unique electric bike tour that will take you from the beach to the hills.
US$ 59.30
Book
like Free

New
Blast over the waves at top speeds while taking in spectacular views of Marbella and Puerto Banús on an unforgettable jet ski tour.
US$ 53.30
Book