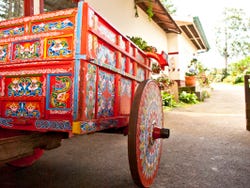 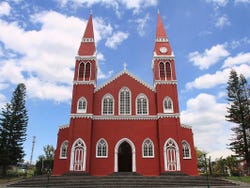 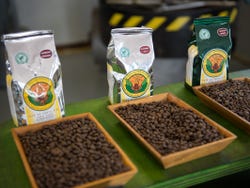 After being picked up from your hotel on the morning of your tour, you'll be taken to Hacienda Doka, one of the largest and most emblematic coffee plantations in Costa Rica. The "golden beans" grown on the Doka Estate are considered some of the best in the country, and you'll be lucky enough to learn all about the coffee production process here.

Having enjoyed your guided tour of the Doka plantation, you'll be treated to a delicious lunch of Costa Rican specialities. Then, with batteries recharged, you'll head to picturesque Grecia. Nestled in the foothills of the Cordillera Central, the volcanic mountain range in central Costa Rica, the city is renowned for its coffee and sugarcane plantations as well as for its production of beautiful textiles.

Exploring the streets of Grecia, you'll reach the Church of Our Lady of Mercy, a unique building for the fact that it is made entirely of steel plates painted red! Dating back to the 19th century, the metal church is an example of European Neo-Gothic style architecture.

The next stop on your tour will be a town considered to be the birthplace of Costa Rican craftwork: Sarchí. The town is home to a large number of artisans who still make the typical local handicrafts to this day, the most famous of which are the Sarchí oxcarts.

Handcrafted from wood and decorated with spectacular colourful painted designs, the oxcarts were traditionally used in the 19th century to transport coffee from plantations in the highlands down to the port on the Pacific coast. You'll get to see the biggest oxcart in the world, considered a national symbol!

At the end of a day packed full of culture, you'll make the return journey to your hotel in San José for 5 pm.

Guided tour of the Doka Hacienda.

You can book up to 4 days before (San José local time) if there are still places available.

Free! Free cancellation up to 4 days before the day of the activity. If you cancel under this time or do not show up, you will not be refunded.
When the minimum number of participants (2) is not reached, we will contact you to offer you other alternatives.

9.50 / 10 27 reviews
Explore Costa Rica's animal world in Tortuguero National Park, home to the green turtle it is named after along with many other protected species.
US$ 136.25
Book
like

9.70 / 10 23 reviews
Spend a day in paradise: enjoy a luxury cruise over the mesmerising turquoise seas of the Gulf of Nicoya to the spectacular Tortuga Island.
US$ 136.25
Book
like

No rating yet
Discover the ruins in Cartago on this trip to the magnificent Irazu Volcano, and then enjoy a boat ride down the Sarapiqui River.
US$ 142
Book