Unravel Taiwan's fascinating history on this Taipei City Tour. Explore the most symbolic monuments around the capital city, including the National Palace, Taiwanese temples, the President Chiang memorial and more.

Unravel Taiwan's fascinating history on this Taipei City Tour. Explore the most symbolic monuments around the capital city, including the National Palace, Taiwanese temples, the President Chiang memorial and more. 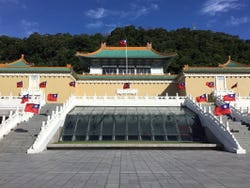 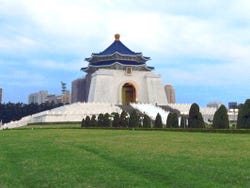 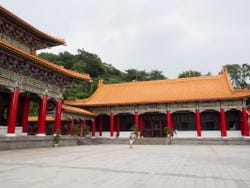 After picking you up at your hotel in the centre of Taipei, we'll get on a minibus and start the guided tour of the historic capital of Taiwan. The city's charm lies in its fusion of modernity and tradition, which you'll discover as we leave behind its imposing skyscrapers to enter its more ancient buildings.

The first stop will be the President Chiang memorial. This impressive monument that honours the Chinese leader is flanked by two majestic buildings in classical style and decorated with an elegant arch at the main entrance. As we discover China's past and present relationships with Taiwan, we'll move on to visit the Martyrs' Shrine.

If we're lucky, we'll be able to witness the changing of the guard in front of this building dedicated to the fallen warriors of the Chinese troops. The tour will continue to the National Palace Museum, where you'll be able to see thousands of samples of China's artistic heritage.

After passing by several Taiwanese temples around the centre, we'll stop in front of the Grand Hotel Taipei, a spectacular red building with an imposing facade.

Wheelchair accessible. Accessible toilets. An accompanying person is required. This must be indicated in the reservation.

The trip was really cool. The guide was a very well English speaker, ready to answer at any question you have. The sites we saw are really important for Taipei and for well understanding of the history of the country. The only bad point is the time. It will be better if there was one more hour.

10 / 10 3 reviews
Discover the most traditional neighbourhood in Taipei, Longshan Temple's secrets and its melting pot of religions with this free night tour.
Free!
Book
like

10 / 10 1 review
Take an alternative tour around the Taiwanese capital and discover its notable monuments and corners of the city with this free tour around Taipei.
Free!
Book