Learn about the history of St. Francis of Assisi, one of Italy's patron saints, with this Assisi Guided Tour. Explore the most important streets, squares and churches around the pilgrimage city.

Learn about the history of St. Francis of Assisi, one of Italy's patron saints, with this Assisi Guided Tour. Explore the most important streets, squares and churches around the pilgrimage city. 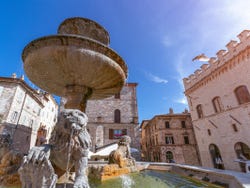 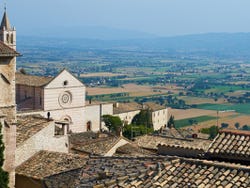 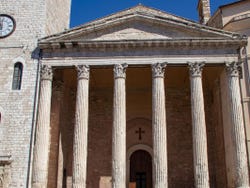 The city of origin of St. Francis of Assisi is an important pilgrimage location for many, but it also surprises those who are not believers. We'll spend three hours walking around the city and stepping back in time to find out about the founder of the Franciscan order and the order of Saint Clare.

We'll meet outside the Saint Clare Basilica to begin our Assisi guided tour. Inside, where the remains of the Italian saint rest, we'll learn more about the life of Saint Clare.

Our next stop will be the Chiesa Nuova, constructed on the site of St. Francis of Assisi's family home. Although this old home has been converted into a church, the three portals that gave access to the house and the ground floor where St. Francis worked are still preserved.

The tour will continue to the Temple of Minerva, located in Piazza del Comune, whose origins date back to the first century BC. Built in honour of the goddess of war, it was converted into a church centuries later as was the case with the Agrippa Pantheon in Rome.

The Upper Basilica will surprise you with its bright and spacious character, as opposed to the darkness and limited space of the Lower Basilica. We'll explore its many chapels and the crypt containing the mortal remains of St. Francis.

The tour will end outside the Lower Basilica of St. Francis, after having visited the main corners of this city.

Free! Free cancellation up to 48 hours before the activity starts. If you cancel under this time or do not show up, you will not be refunded.
US$ 46.80
Book

9 / 10 8 reviews
By booking the Assisi Private Tour you'll have an exclusive English guide at your disposal to discover the history of Saint Francis and the pilgrimage city.
US$ 166.50 per group
Book
like

10 / 10 2 reviews
Visit a UNESCO World Heritage city and discover beautiful villages with this Assisi & Spello Guided Tour. Be captivated as you explore the charming locations.
US$ 83.20
Book
like

No rating yet
Enjoy the flavors of the finest grapes of Umbria with this wine and cheese tasting in Assisi.
US$ 36.40
Book