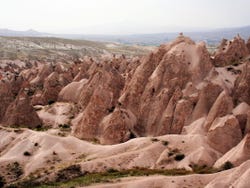 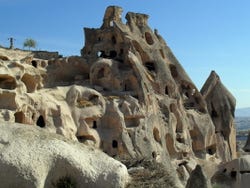 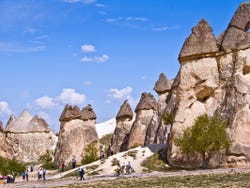 Between 9:30 am and 10 am on the morning of your tour, you'll be picked up from your hotel, ready to discover the magic of northern Cappadocia, one of Turkey's most impressive and scenic regions and the home of the famous fairy chimneys.

Your first stop will be in the Devrent Valley. Locally known as "Imagination Valley", the area is home to some of the most spectacular natural rock formations in the world, many of which seem to have been eroded into particular shapes. See if you can spot formations like the kissing birds, the seals or the dolphin; there's even one said to resemble the Virgin Mary and Napoleon's hat.

Continue through northern Cappadocia to the Göreme Open-Air Museum. One of the highlights of the area, the museum is home to a large number of ancient churches, chapels and monasteries excavated out of the rock. Inside, well-preserved frescoes of Biblical scenes painted onto the cave walls have retained their vibrant colours.

Having explored this unique and fascinating complex, you'll then make your way to the troglodyte settlement of Uçhisar, an incredible landscape of underground homes, cloisters and passageways overlooked by the impressive Uçhisar Castle, a cylindrical mountain once inhabited by over a thousand people. From the castle, you'll have incomparable views over one of the area's most iconic features, the famous fairy chimneys scattered throughout Cappadocia.

Learn more about these mind-blowing geological formations on the next stop at your tour: Pasabag, also known as the Valley of Monks. See the fairy chimneys, or "hoodoos", up close as you discover how they got this name and more interesting facts about their history.

At the end of a fascinating day, you'll return to the bus and make the journey back to your hotel in Cappadocia at 4 pm.

This tour includes pick up from the following areas in Cappadocia: Mustafapaşa, Ürgüp, Ortahisar, Göreme, Uçhisar and Avanos. If your accommodation is located in a different area of Cappadocia, please make your own way to the meeting point at 41/1 Istiklal Street, Urgup.

Visit to a ceramics workshop.

US$ 62.20
Free cancellation up to 48 hours before the service starts
Book

A very complete excursion. Due to the current situation, the number of tourists is less and everything is seen in a calm way. We had a private tour! Esra, the guide, is very friendly, knows the area very well, gives many explanations and speaks Spanish very well. Opinion translated. Show original.

The tour has been for 10. We were a group of 3 people and it has been like having a private tour for us. The guide that has touched us was super nice and close. In short, it was like spending the day with friends. We have visited everything included in the tour, and he has also given us several indications about other things to do in Goreme, such as watching the sunset and how to get there. Buffet food quite acceptable and with a lot of variety. Opinion translated. Show original.

The excellent guide very friendly and in our language Opinion translated. Show original.

The comfortable car. The attentive and correct guide. Restaurant food good. And I think we knew all the advertised places. Opinion translated. Show original.

We have loved the tour. It is a place worth seeing, without a doubt. I recommend doing the Tour, because on your own it is much more difficult and also you do not have the explanations. The guide, Ismael, is fabulous, explains everything wonderfully and is very flexible to the wishes of tourists. I highly recommend it to everyone Opinion translated. Show original.

8.70 / 10 33 reviews
When you think of Cappadocia, the image that comes to mind is colourful balloons flying over spectacular natural landscapes - see it for yourself!
US$ 147.10
Book
like

No rating yet
When you book our private tour of Cappadocia you will have an English speaking guide and personal vehicle exclusively for your group.
US$ 169.80 per group
Book
like

No rating yet
Immerse yourself in the magic and mysticism of ancient Turkish culture with this traditional Whirling Dervish dance ceremony.
US$ 45.20
Book