See Cartagena from a new perspective exploring the Getsemani neighbourhood with an English-speaking guide. Discover colourful houses and incredible street art on this free walking tour.

See Cartagena from a new perspective exploring the Getsemani neighbourhood with an English-speaking guide. Discover colourful houses and incredible street art on this free walking tour. 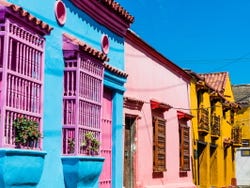 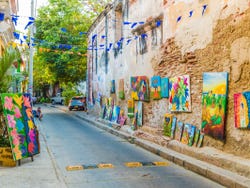 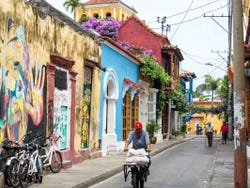 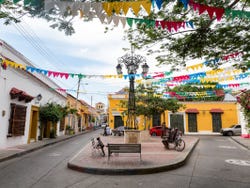 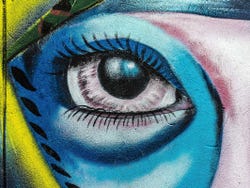 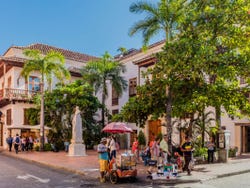 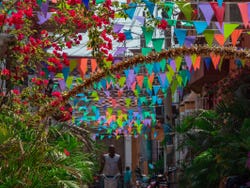 After meeting your guide at 4 pm in Camellón de los Mártires Square, you'll begin your free walking tour of the Getsemani district, ready to discover why it is known as one of Cartagena's most fashionable neighbourhoods!

Kick off your guided tour discovering the Parque del Centenario, a park created to commemorate the centenary of Colombian independence. You'll then head onwards to Plaza de la Trinidad, one of the busiest squares in Cartagena and a place which marks the start of the Getsemani neighbourhood, as a historic meeting point of the locals. The mustard-yellow Church of the Trinity completes the picturesque feel of this plaza, and from here the colourful streets really start to capture your attention.

As you walk through the streets of Getsemani, take the time to admire the vibrant graffiti painted by local artists on the walls. The beautiful murals represent a range of topics, from underlying social commentary to celebrations of local culture.

Continuing on your free walking tour, you'll visit the monument to Pedro Romero, an important working class leader and the first non-white military officer in Cartagena, and the Lanceros of Getsemani, the militia group he lead in the fight for independence from Spain in the 19th century.

Your free walking tour will also take you to the Mercado de Bazurto, an enormous open-air market where anything and everything is on sale, and the Plaza "El Pozo", a square traditionally used for public gatherings, plus much more.

And what is that you can hear? Throughout the tour, it won't be your eyes feasting on the delights of the colourful streets and flower-filled colonial style houses of Getsemani, but your ears will also be treated to the sounds of vallenatos, traditional Colombian folk music.

At the end of a fantastic free tour, you'll finish back at the original departure point at 7 pm.

It is not possible to reserve this tour for groups larger than six people. If you are a larger group, we recommend booking our private tour of Cartagena de Indias.

You can book up until the previous day (9:00 pm) if there are still places available. Book now to guarantee your spot.

The area is great, but we spent more than 30 min at the meeting point before actually getting to Getsemani with our guide talking about some historical facts that had little to do with the Getsemani itself. I would rather spend more time seeing the area. But the tour is definitely worth to take.

The free walking tour for Getsemani with Arturo was super fun, and we were able to enjoy the very local vibrant and colorful neighborhood From taking pictures on the murals to trying Lulo in a local restaurant An experience that you will not regret Thank you!

Arturo was amazing and we had a great time with him!! Definitely will recommend your company to my friends.

Our tour guide was wonderful! She had a lot of energy and you could tell that she had a lot of love for Getsamani. I loved hearing about the murals and learning Champeta.

Tour guide was knowledgeable, very nice and happy, energetic person. She even gave us a mini Chámpeta class at the end of the tour. Overall 100% recommended.

9.30 / 10 49 reviews
Explore the colourful streets of Cartagena, see the city walls and the emblematic squares and discover its fascinating history on this free walking tour.
Free!
Book
like

Do you want to know more about the life and work of Gabriel García Márquez? Discover the Cartagena de Indias that inspired the stories and novels of the Nobel Prize winner on this free tour.

No rating yet
Paradise is closer than you think! Come and see it with our Tierra Bomba Day Trip from Cartagena de Indias. You'll be able to relax and sunbathe.
US$ 38.50
Book