Explore the colourful streets of Cartagena, see the city walls and the emblematic squares and discover the history of conquests and the inquisition. You'll fall in love with the city on this two-hour free walking tour. 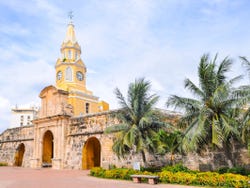 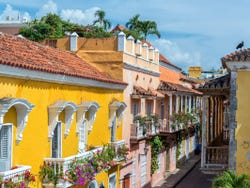 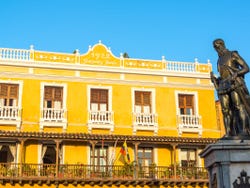 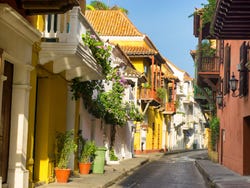 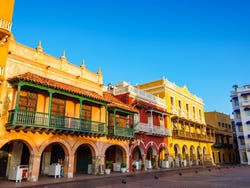 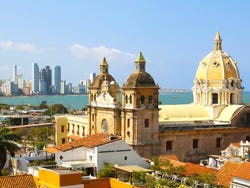 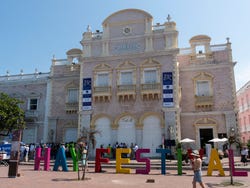 We'll meet on the Camellón de los Mártires walkway to start our walking tour around Cartagena. We'll head towards the city walls, named by UNESCO as a World Heritage Site and we'll arrive at the San Pedro Claver square. Here, we'll admire a church with the same name and our expert guide will tell us about the Spanish saint it represents.

We'll cross the old port of the city to reach the clock tower. With its yellow walls, this icon of the city has been welcoming locals and tourists since the 19th century. Next, we'll pass through another square, Plaza de los Coches, where we'll see the statue of Pedro de Heredia, the founder of Cartagena de Indias!

We'll continue discovering all about him in the Teatro Heredia theatre, and we'll travel back in time at the Palace of Inquisition. Did you know that this colonial house used to have torture chambers? After, we'll head to the Simón Bolívar Park, the green heart of the city.

We'll wander through the city's winding streets until reaching the Santa Catalina de Alajandría Cathedral, one of the oldest cathedrals in South America. The dome, with its colours and details, has become one of the symbols of Cartagena.

Finally, we'll see the emblematic Plaza de la Aduana; a square which used to be the administrative centre of the city. Plus we'll see where Pedro de Heredia used to live and a statue of Christopher Colombus.

We'll finish the tour in the centre of the city.

Please note, this free tour is not available for groups of more than 6 people.

Liz was a wonderful guide. It was very interesting to learn the history of Cartegena. She spoke loudly so everyone could here.

Fernando was knowledgeable and funny!! There was a lot of information shared and even the chance to learn some dance steps!!

Juliette was very nice and she explained everything in a easy way. We enjoyed the tour very much and we recommend it.

9.10 / 10 32 reviews
Get the best views across the Cartagena bay. Complete your holiday with a memorable evening of drinks and music while sailing into the sunset.
US$ 16.60
Book
like

9.20 / 10 82 reviews
On this cruise, you'll enjoy a delicious dinner on the Cartagena bay. When night falls and the city is illuminated, it's perfect for a Caribbean soiree.
US$ 33.10
Book