Located on the banks of the Guayas River, vibrantly colourful Guayaquil is the largest city in Ecuador. Discover the cultural heritage of the "Pearl of the Pacific" on this guided tour.

Located on the banks of the Guayas River, vibrantly colourful Guayaquil is the largest city in Ecuador. Discover the cultural heritage of the "Pearl of the Pacific" on this guided tour. 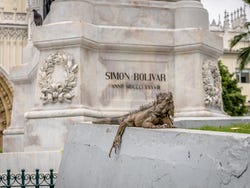 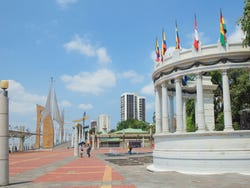 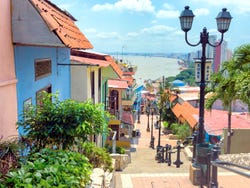 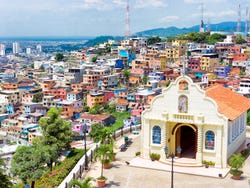 After being picked up from your hotel, you'll head into the heart of Guayaquil and delve deep into the main streets and avenues of the city centre.

The first stop on your guided city tour will be in Parque Seminario. As you admire the beautifully decorated garden and its peaceful lake, you'll learn why it is also known by the names "Simón Bolívar Park" and "Iguana Park". The Neo-Gothic Metropolitan Cathedral of Guayaquil provides an impressive and contrasting backdrop to the urban green space and the exotic iguanas that populate the park, some of which can grow up to a metre, or over 3 feet, in length!

You'll then wander down the popular Malecón 2000, the riverside boardwalk that is home to many of the city's most important monuments, from museums and gardens to piers and viewpoints. Strolling along the banks of the Guayas River has become on the most popular visits in Guayaquil.

Reaching the semi-circular Rotonda, the monument to the liberators of South America, you'll hear all about the history of the famous "Guayaquil Conference" which took place in 1822 between the Venezuelan Simón Bolívar and the Argentinian José de San Martín to discuss the future of the countries and their independence.

Head into the oldest part of the city to explore the Las Peñas district. The colourful wooden houses are emblematic of colonial architecture and make this one of the most beautiful neighbourhoods in historic Guayaquil.

For the finishing touch on your guided tour of Guayaquil, you'll climb up to the peak of the Santa Ana Hill. From the viewpoint of the old La Polvorosa fortress, you'll enjoy magnificent panoramic views over the city and the Guayas River.

At the end of your tour, you'll be dropped back off at your hotel.

This tour includes a hotel pick up and drop off service from the main hotels in Guayaquil: Grand Hotel Guayaquil, Continental, City Plaza, Palace, Hampton Inn, Hilton Colón and Wyndham.

If you prefer to get to know Quito with an exclusive guide, you can book a private tour of Guayaquil.

Our guide Ricardo was excellent, he gave us a very complete tour of the city. You can tell that he loves his job and knows a lot about the history of the city and Ecuador in general. Besides, he was a very friendly and communicative person. We are delighted !!! Opinion translated. Show original.

Everything perfect! Ángel was a very good guide, adapting the visit to what we did not know about the city and without stopping to tell very interesting things, both history and social and economic aspects that help to understand the current situation in the country. We learned a lot with him, highly recommended. Opinion translated. Show original.

Nice and cheap for a first contact with the city. Angel was very good :) Opinion translated. Show original.

No rating yet
Discover Ecuador's plants and wildlife on this trip to the Manglares Churute Reserve, one of the most incredible natural spaces on the Gulf of Guayaquil.
US$ 120
Book
like

No rating yet
Discover the highest peak in Ecuador with this trip to Chimborazo volcano. You will also visit the enchanting church of Balbanera.
US$ 63
Book
like

10 / 10 2 reviews
The Guayaquil tourist bus is the best way to visit the most emblematic places in this Ecuadorian city located on the banks of the Guayas River.
US$ 8
Book