Delve into the history of Vietnam on this complete guided tour of the ancient capital: Hue. Explore the imperial tombs, the Citadel and the Thien Mu Pagoda, and end the day with a sunset dragon boat ride on the Perfume River.

Delve into the history of Vietnam on this complete guided tour of the ancient capital: Hue. Explore the imperial tombs, the Citadel and the Thien Mu Pagoda, and end the day with a sunset dragon boat ride on the Perfume River. 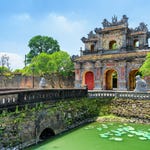 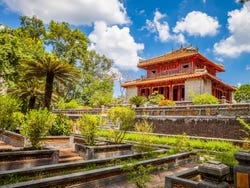 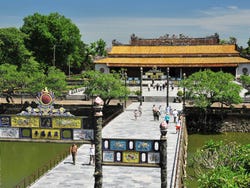 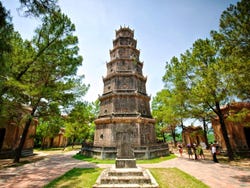 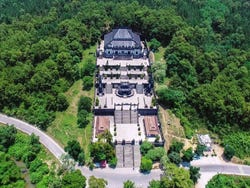 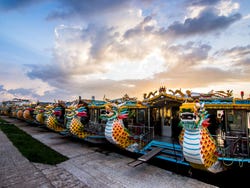 On the morning of your tour, we'll pick you up from your hotel ready to begin our complete guided tour of Hue.

First, we'll take a boat trip to the Thien Mu Pagoda, also known as the Pagoda of the Celestial Lady, a historic seven-storey temple which guards over the Perfume River from its hilltop location. The iconic pagoda has become the symbol of the city thanks to its size, location and beauty.

We'll then head to Hue Citadel, the former imperial capital of Vietnam. After marvelling at its huge flag, the tallest in the country, we'll enter the ancient city to visit the Mandarin Hall, the Ngo Mon Gate, the Thai Hoa Palace and the Forbidden Purple City, a small enclosure inside the citadel that was reserved only for the emperor.

Halfway through the morning, we'll visit Dong Ba Market, the largest in the area, home to many different food stalls. As well as admiring its old bell tower, you'll have the opportunity to buy typical Vietnamese products. Afterwards, we'll head to a local restaurant, where we'll be served a delicious meal of local Vietnamese delicacies.

After lunch, we'll head to the Tomb of Emperor Minh Mang, the most beautiful of the seven imperial mausoleums in Hue, inspired by the tombs of the Chinese Ming dynasty. We'll then visit the imperial tomb of Kai Ding, a unique blend of Vietnamese and European art.

Later, we'll visit a small village famous for making incense sticks and the conical hats typical of Vietnam. We'll learn how these are handcrafted, as well as having free time to buy souvenirs and gifts.

At the end of the day, you'll be dropped back off at your hotel in Hue.

8.70 / 10 3 reviews
Live the history of the Vietnam War with this excursion to Vietnam's demilitrised zone. We'll visit the military bases, scenes of bloody battles, and the famous tunnels.
€ 20.90
Book
like

With this eSIM card with phone data, you can stay connected at all times during your trip to Vietnam - a simple way to share with your loved ones the dreamy spots in Southeast Asia.

10 / 10 1 review
Climb to the lofty heights of Ba Na Hills for spectacular views over the verdant valleys of Vietnam and visit Golden Bridge and its iconic giant hands!
€ 252.70 per group
Book