Discover the most important places of interest in the Punjabi capital on this three-day guided tour of Lahore: visit the Badshahi Mosque, Lahore Fort and the Minar-e-Pakistan! 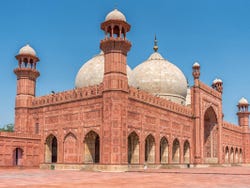 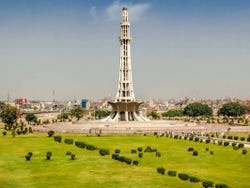 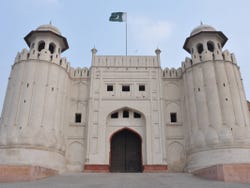 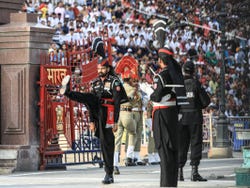 At the scheduled time on the first morning of your tour, we'll pick you up from your hotel to begin exploring Lahore, the capital of Pakistan's Punjab region and the country's second largest city. Get ready to discover its most emblematic monuments accompanied by an exclusive English-speaking guide just for you and your group!

Our first stop will be the Minar-e-Pakistan, a huge minaret of over 200 feet (62 metres) in height that represents the freedom and independence of the Pakistani people. From there, we'll head to the Badshahi Masjid, also known as the Emperor's Mosque. You'll soon understand why, as you learn all about the monument's history while admiring its majestic architecture.

We'll then head to the nearby Lahore Fort, known as Shahi Qila, or Royal Fort, locally. This historic citadel is considered one of the finest examples of Mughal fortresses in Pakistan. After visiting the fort and before dropping you back off at your hotel, we'll take you to the popular Fort Road Food Street, where you'll be drawn in by the enticing aromas of traditional Lahori foods on one of the liveliest streets in the city.

After picking you up from your hotel, we'll head out for our second day of adventure in Lahore. First up, we'll visit the Wazir Khan Mosque, one of the most famous mosques in the country and one of the best examples of Mughal architecture.

We'll then enjoy a moment of peace and tranquillity, relaxing in the Shalamar Garden, a beautiful park constructed at the time when the Mughal Empire's artistic splendour was at its peak. Relaxing in this oasis of calm and nature will be the perfect break in our three-day tour of Lahore.

Our last stop will be at the Wagah-Attari border, where we'll witness the daily military ceremony practised by the Indian and Pakistani forces since 1959. At the end of the day, we'll drop you back off at your hotel.

On the last day of our tour, we'll pick you up from your hotel and take you to the Lahore Museum. Here, we'll have the opportunity to admire some of the best historical pieces found in Pakistani archaeological sites.

Afterwards, we'll continue our historical tour through Lahore visiting a spectacular collection of mausoleums where the governors and kings of the Mughal Empire are buried. The tombs are exquisite examples of Mughal architecture, the final resting place of Emperor Jahangir among others.

We'll then be immersed in Pakistani culture as we enter the heart of Lahore, the famous Aanarkali Bazaar. At this last stop, you'll have the opportunity to buy some unique souvenirs at a good price.

Having explored the labyrinthine streets of the market, we'll drop you back off at your hotel after an unforgettable three-day tour of Lahore.

This is a private tour organised exclusively for you and your partner, family or friends.